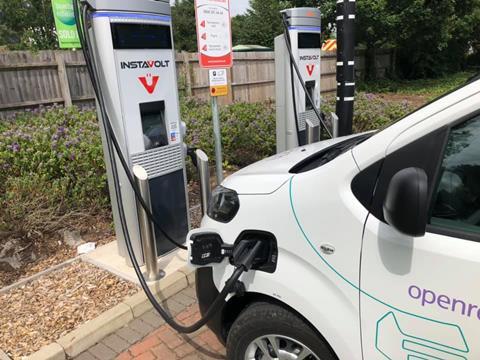 Openreach CEO Clive Selley did not mince his words when describing the state of the charging infrastructure for electric vehicles (EV) in the UK, particularly with regard to commercial van fleets.

Selley was speaking this week at the Labour Party Conference, during a panel session titled The Road to Net Zero: Decarbonising Road Transport.

“ As a commercial fleet operator, the vision has to be: the van pulls into a service station and spends no longer charging that battery than the guys used to spend filling up with diesel. I’m talking ten, 15, 20 minutes max to get a decent load of electricity into a vehicle. Otherwise, I’m paying for my workforce to sit at fuel stations plugged in and not being productive. ”

Selley said this means that a fast‑charging infrastructure is required, not trickle charging, “because it is not adequate for the vision of a fully electric UK fleet”.

“ And the challenge there is massive for this country because [for it to work for commercial fleets]… we need to restructure the national grid, the mechanism for the distribution of the big power pipes in this country. Fuel stations need to have huge electric pipes coming into them. That’s a decade‑long project, and we should have started a decade ago. We are behind the game. ”

In addition to investing in the public charging network, Selley outlined three key areas he believes the government and others should be focusing on to assist the transition of commercial van fleets to non‑carbon generating fuels:

1. Greater certainty on government grants for the purchase of EVs.

2. Investment in hydrogen infrastructure as a long‑term solution for heavy vehicles.

3. The development of UK manufacturing capabilities for EVs.

Selley conceded that Openreach is currently a “big part of the problem” in terms of transport pollution because it owns the second‑largest commercial van fleet in the UK, after Royal Mail.

“We have 28,000 engineers in vans on the road, and that fleet today is almost completely diesel”, he highlighted. However, Selley insisted that Openreach also intends to be “a very big part of the solution … we’re absolutely committed to transforming this fleet by the end of the decade”.

In July, BT Group joined forces with BP, Direct Line, Royal Mail, Scottish Power, Severn Trent, and Tesco to establish the Electric Vehicle Fleet Accelerator to help increase the uptake of EVs in the UK (BTwatch, #328). The companies emphasised that, “with supportive government policy in place”, they would commit to fully converting their fleets to electric and collectively purchasing 70,000 British‑made EVs by 2030. BT Group CEO Philip Jansen’s comments at the time chimed with Selley’s latest complaints, noting that “we want to buy British, but to do that we need to be confident that the supply of vehicles, components, and charging points to keep our vans on the road will be sufficient, [which] needs to be a team effort with government”.

BT is a founding member of the UK Electric Fleets Coalition launched by The Climate Group to support the transition to low‑carbon vehicles. As things stand, 114 members have committed to switch their fleets to EVs and/or install charging for staff and customers by 2030.

BT has also previously called on the government to support the roll out of public charge points for EVs to help it meet its target of becoming a net‑zero carbon emissions business by 2045, and has trialled electric vans from the London Electric Vehicle Company, as part of a pilot also involving DPD, Octopus Energy, and Royal Mail (BTwatch, #300, #317, and passim).

Selley said Openreach currently has 600 electric vans. “We could have many, many more if the manufacturers could produce them. I think the supply problem has been exacerbated by the pandemic, chip shortages … but we are constrained by the manufacturers right now. We are keen to buy more than we can get our hands on, and many of the electric vans that are available are merely conversions of cars, so they’re the smaller stuff”.

The CEO said the electric vans have been well received by employees and customers. However, he said “range anxiety” is the biggest problem. “If you’re at an event and you’re not sure you’ve got enough electricity to get yourself home that evening, that is a proper concern, a very legitimate worry”, he said. “We have got to fix the public charging infrastructure, and we are a world away from doing so right now”.

The CEO described Openreach as an “anchor customer” for carmaker Vauxhall in Luton. “I buy a lot of Vivaros, which are made on the production line in Luton — they are all diesels”.

However, it appears that Selley has been forced to turn to the Spanish factories of Vauxhall parent Stellantis in order to get his hands on electric Vivaros. “We have to get the manufacturing infrastructure in place for electric vans in the UK, and the support infrastructure … so particularly the giga factories that will produce the electric batteries that will charge these electric vans and electric cars”, he said.

Also on the panel was Steve Turner, Assistant General Secretary of trade union Unite, who was able to give Selley the good news that the electric Vivaro will soon go into production at Luton. “We’re talking to other major manufacturers from Jaguar Land Rover to Nissan and Toyota to make sure that their product range is equally full electric in time for 2030, if not before 2030”, Turner said. Selley joined Turner in welcoming the fact that the compact Vauxhall Combo van is to be produced at the carmaker’s Ellesmere Port factory from 2022.

Selley emphasised that his goal is for the entire Openreach fleet to be non‑carbon emitting by 2030. However, he warned that a technology beyond electricity is required for very heavy vehicles. “I think [hydrogen] is a very likely candidate, but, as a nation, we need to place our bets. If it’s hydrogen, then we haven’t got long to get the infrastructure in place”, he said.

Another panellist, Kerry McCarthy, MP and Shadow Minister for Green Transport, said “we want to see the shift to green hydrogen as soon as possible. I think the figures are that Germany’s put something like €9bn [£7.7bn] into its hydrogen strategy; we put £300m [€349m] in, so we’ve got a long way to go”.

In July 2021, the UK government published its Transport Decarbonisation Plan, which includes a commitment to phase out the sale of new petrol and diesel cars by 2030. This forms part of its aim to reduce greenhouse gas emissions by 28% by 2035 and move to net‑zero by 2050. A July report from the Competition and Markets Authority said forecasts suggest that at least 280,000 public charge points will be needed by 2030 — more than ten times the current number of about 25,000. The CMA has recommended that the government sets out an ambitious strategy for EV charge point deployment between now and 2030.

Unite’s Steve Turner expanded on some of the challenges facing the automotive industry as it transitions to the production of EVs. He estimated that about 800,000 people are currently employed in this sector in the UK. “About 80% of all employees in the auto sector right now are employed in manufacturing parts that will not be required in an electric vehicle. For every ten people it takes to manufacture a combustion engine, there will be one employed to manufacture an electric drive unit”, he noted.

Turner highlighted the need to bring more manufacturing processes back to the UK, including battery production, rather than just assembling imported parts. He pointed to the opening of a lithium mine in Cornwall, and said the technology is now available to mine cobalt from the base of the Atlantic Ocean.

Selley also tackled the issue of second‑hand EVs and the problem of batteries degrading over time, outlining a potential new economic model where people buy an EV but rent the battery pack. “I think that might emerge and that might actually help those who are in the market for second‑hand EVs rather than very expensive brand‑new ones”, he said.