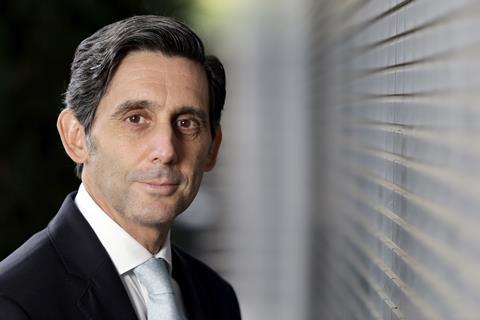 A strong academic pedigree in economics and accounting, plus well-honed management skills, helped Álvarez-Pallete make his mark in business at a relatively young age.

Before joining the Group as CFO for Telefónica Internacional in 1999, Álvarez‑Pallete commenced his career as a junior auditor at Arthur Young Auditores. He then spent six years in corporate finance at Benito y Monjardín and Kidder, Peabody & Co. Afterwards, he worked a four-year stint at outposts of Mexican multinational CEMEX, including as CFO for Spain and with oversight of Indonesian and Singapore operations.

Joining Telefónica aged 35, he occupied various key positions and rapidly overtook more established leadership candidates to take over the reins from the racier César Alierta as Chairman and CEO in 2016.

Álvarez-Pallete is something of an academic prodigy, boasting graduate and postgraduate degrees in economics from the prestigious Complutense University of Madrid (the latter completed in 2009, while heading Latin America for Telefónica). He also studied economics at the Free University of Brussels aged 17, and holds a Masters in international management from IPADE.

There seems to be two sides to Álvarez-Pallete. On the one hand, he can be the self‑conscious academic, happy to show off his nous in economics, penchant for strategy, and grasp of detail. When leading the then‑growing Latin American operations of the Group in the 2000s, Álvarez‑Pallete was keen on giving mini‑lectures on the region’s macroeconomic conditions in support of his case for future growth.

On the other hand, and somewhat unusually for an incumbent telco CEO, he can give the impression — to use Mark Zuckerburg’s motto — of wanting to “move fast and break things”. He also seems very comfortable delegating day-to-day responsibilities to lieutenants.

In 2011, as Telefónica Europe CEO, Álvarez‑Pallete was instrumental in setting up Wayra, Telefónica’s startup accelerator. It was at Wayra that the talented (and woolly‑hatted) Chema Alonso began his Telefónica career. Álvarez-Pallete later took Alonso under his wing, appointing him Chief Data Officer. But Álvarez-Pallete’s handling of Alonso shows he is not one for blind loyalty. Alonso no longer reports to him, occupying what looks a more focused position as Chief Digital Consumer Officer.

Another Álvarez‑Pallete trait is slimmed-down management structures. He recently unveiled a five-point reorganisation plan for Telefónica, which, he boasted, would position the Group “for the next 100 years”.

But it is not all work and no play. Álvarez‑Pallete is a keen runner, and, some years ago, was caught on camera playing Candy Crush on his tablet while Alierta was giving a speech.

Likely to say: “Let me see the macro-economic analysis.”

Unlikely to say: “Leave things the way they are.”