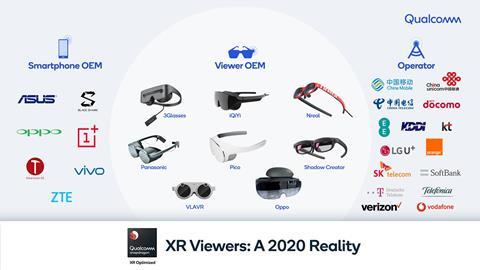 Deutsche Telekom, EE, Telefónica, and Vodafone are among 15 operators supporting a new Qualcomm testing programme intended to foster an environment for the development of extended reality (XR) applications as a driver of 5G adoption.

Qualcomm subsidiary Qualcomm Technologies said that the group of operators (nine from Asia, five from Europe, one from the Americas), as well as XR kit makers and smart device manufacturers, would support the launch of a new wave of commercial XR viewers for both business and consumers by mid-2021.

The partnership was flagged as part of Qualcomm’s presence at the (fittingly online) Augmented World Expo in late-May 2020, and forms the basis of the Qualcomm XR Optimized Certification Program. The programme will test performance and compatibility between viewers and 5G smartphones, with the initiative offering separate certification for viewers and devices. This is expected to remove the need for one-to-one optimisation, on the assumption that a device that has achieved certification will work with any similarly ratified viewer.

Building on Qualcomm’s Snapdragon 855 and 865 mobile platforms, certified equipment will facilitate the tethering of a range of new headsets to 5G-enabled handsets that will act as a type of hub for the wearables. The headgear will apparently be physically tethered to the smartphones with a USB-C cable.

The key areas tested by the Qualcomm XR Optimized Certification Program are:

Operators in the hunt for killer apps

To date, operators have tended to use augmented and virtual reality technology principally as a kind of ‘conference-ware’ — providing the bells and whistles for demonstrating the capabilities of next-generation connectivity, with the focus on aspects such as speed and latency. The new partnership is an indicator that the operators are now looking more earnestly at marketable XR applications, and are willing to support the development of a new XR device category to fuel demand for 5G services.

The promises of the new partnership continue to focus on the high-bandwidth and low latency benefits of 5G as key enablers of immersive experiences. Potential applications for the technology lean on previously floated ideas such as enhanced telepresence for work meetings and adding augmented reality layers to consumer apps.

Sean Seaton, Senior Vice-President, Group Partnering & Devices at Deutsche Telekom, said the operator shares a belief with Qualcomm that “XR will soon transform the way we interact fundamentally”, while noting a partnership with headset maker Nreal on development. As well as providing capable networks, DT is expecting to develop an integrated XR service that will draw on broadcast content such as concerts and sports events used in an XR setting alongside gaming services.

Telefónica described XR as a “clear use case” for 5G and highlighted that its UK 5G launch featured concert footage with virtual reality, to illustrate the potential of the network. Vodafone, meanwhile, said it was developing its own range of applications that could benefit from the certification programme, and underlined the importance of 5G to developing the XR market.

EE was absent from the supporting quotes accompanying the programme launch, but has been actively exploring immersive technology in conjunction with its sport content rights.