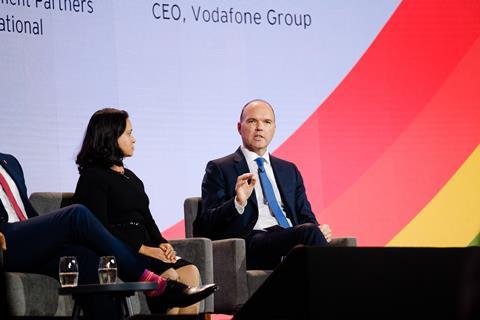 Vodafone’s leadership duo of Chief Executive (CEO) Nick Read and Chief Financial Officer (CFO) Margherita Della Valle presented the Group’s results for the quarter and half-year to 30 September 2020 (Q2/H1 FY20–21), and the narrative was again shaped around ‘sticking to plan A’ despite the change being wrought by the coronavirus.

At one level, the numbers presented Read and Della Valle as accomplished caretakers — navigating the business through the crisis, squeezing the throttle a bit more on operational and structural changes to mitigate COVID‑19’s impact, and nudging the Group’s results into their guidance window to avoid any bad-looking downgrade.

At the same time, with Vodafone’s dividend “re‑based” in 2019 (Vodafonewatch, #175) and the Group’s share price remaining well down on the (already depressed) level it was at when Read became CEO, they recognised a need to offer stakeholders something less prosaic, post-pandemic.

The prep put in on messaging around this was obvious, and perhaps a little ‘too much’ at times, with Read working particularly hard to stress he has a vision for healthy cash generation in the medium- and long-term — and beyond the asset dismantling and ‘monetisation’ he and predecessor Vittorio Colao have been primarily known for.

Analysts were presented with another scripted mea culpa by the CEO, who conceded he was “not satisfied with our current position” — i.e. the share price. The presentation was then glossed up with an impressive range of phrases designed to acknowledge current difficulties but pass them off as only a staging post in the transition to something better.

The Group’s H1 performance was “resilient”, analysts were told five times in the first minute and a half of Read’s speech.

He said the top team had made “cumulative progress” since 2018, and built good “underlying momentum” — although a definition was offered of neither. “Strong progress against our plans has not yet been enough to improve returns for our shareholders”, relayed the CEO from his prompter. “We must do more to build on the strong foundations we have created in reshaping Vodafone to drive shareholder returns”, Read added.

The downside of this part of the presentation was that Read’s actual medium-term vision remains something of a mystery.

The CEO has, in fairness, had a clear and positive impact on Vodafone’s strategic positioning since 2018, differentiating his approach from Colao’s premium-focused dogma by freeing OpCos to defend share at all levels of the market, and encouraging retention through up‑selling, value sub‑brands, digital care, and “unlimited” tariffs.

Churn has also been coming down in most markets for which Vodafone provides figures, including the Group’s German centre — where mobile contract churn was 40 basis points lower, at 12.1%, and nearing Read’s ‘single figures’ target for the Group as a whole. Overall, Vodafone reported European mobile contract churn at 12.9% — although it was not clear which markets this figure included.

Nonetheless, Read’s ability to transform the Group remains limited by the decisions of the Colao era, in which he was himself a major protagonist.

To Vodafonewatch, cornering the Group in Europe’s stodgy telecoms market is clearly a decision that continues to haunt Vodafone, especially as Read’s ongoing push for a reset of regulatory relations in the region is yet to yield any obvious change of course. On this front, Read declared himself “pleased to report that we are making tangible progress” — despite having launched a broadside against authorities in Italy and Portugal in the weeks leading up to the presentation (Vodafonewatch, #189).

“I have been actively engaged with the European Commission; I was with Commissioner Breton last week, and Vestager about three weeks before that. I am very actively engaged; we have got another industry meeting in a couple of weeks’ time, talking about what makes a healthy industry structure and what things we need to have facilitated. I would say [I am] very much leaning into that, and they are listening because they understand the criticality now of connectivity if they want a digital society. ”

The talk of brighter growth prospects would have been more convincing had there been more substance on offer regarding either Group expectations (where Read remains unapologetically wedded to providing a thin set of near-term forecasts only) or strategic planning.

Particularly striking was the inference in the Group’s slide deck that Vodafone’s already overdue Technology 2025 strategy may not be laid out fully until December 2021, when Chief Technology Officer Johan Wibergh will hold a virtual investor briefing to present Vodafone’s “2025technology vision”.

Targets laid out under Wibergh’s last programme, dubbed Technology 2020, expired in March 2020 (Vodafonewatch, #188), and all that was on offer in the slides was a fairly vanilla graphic reiterating “telco-as-a-service” ambitions built on “open digital architecture”, open source components, and unified data — plans the Group’s supplier ecosystem will already be well versed in.

The ongoing Tech 2025 lag adds to the sense that COVID‑19 has added to a troubling shortage of capacity and diversity at the top of the Group, affecting its ability to multi‑task and quickly embrace change in the market and economy to push in new directions. Further, it appears probable that new Chairman Jean‑François van Boxmeer (Vodafonewatch, #186) could be putting strategic announcements on pause in order to make his mark on the plans.

It was somewhat ironic that the presentation saw Read detailing a framework governing how the Group leadership team decides whether to keep or sell in‑country assets (see separate), and this requires OpCos themselves to have a “credible and actionable, long-range plan”.

Read hinted there may be more offered on the Group’s own “long-range plan” when Vodafone’s FY20–21 results are announced in May 2021. It remains to be seen, however, whether this so‑called “Phase Two” of his leadership will differ much from “Phase One”, with the slide deck detailing an “efficiency and growth” focus centred on already very familiar themes: