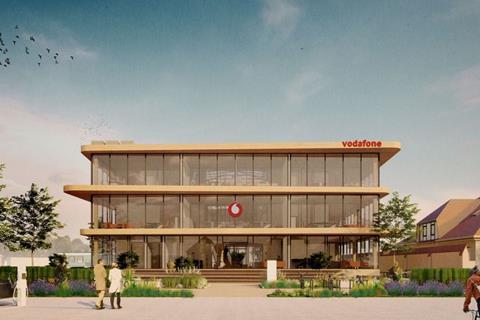 Vodafone unveiled a second site for its European R&D centre in Dresden, focusing on next‑generation technology innovation through public and private partnerships.

The Dresden Hub, formally known as the Vodafone Tech Innovation Centre Dresden, will see 200 technical jobs created. It will launch in October 2022 in a newly‑renovated office in the city’s Ostragehege district, close to the Dresden exhibition centre. A second building will be opened by 2024 for a combined 2,700m². It is supported by a partnership with local project developer Ventura Investment.

The focus for the Dresden Hub appears relatively broad, but technologies that leverage 5G and 6G networks are at the forefront. Specific verticals identified include connected mobility, digital health, and industrial automation. Technologies noted include the usual suspects such as augmented reality and cybersecurity.

Vodafone Germany Chief Innovation Architect Ralf Irmer said the Dresden unit will leverage a “co-creation approach”. Together with partners in industry and science, the operator aims to play a role in “the design of the metaverse through joint technology development”. The operator’s 5G standalone network, dubbed 5G+, and the 6G network will underpin this work, Irmer said.

Among the first of the 200 prospective jobs to be advertised is a Senior Manager for Publicly Funded Projects, indicative of Vodafone’s interest in partnering with local government to drive innovation. Thierry Tournassat, Director of Property at Vodafone Germany, said that Dresden was chosen due to the operator’s “very constructive and goal‑oriented cooperation” with the state government and city council.

Dresden was selected alongside a sister site in Málaga, Spain after a competitive process in early‑2021. Vodafone Germany has long historical ties with the Dresden University of Technology (TU Dresden) on R&D into new mobile technologies, including 5G (Vodafonewatch, passim). The Vodafone Chair for Mobile Communications Systems at TU Dresden was established in 1994, although initially under Vodafone acquisition Mannesmann. Ten minutes down the road from the new Dresden Hub is Vodafone Group’s Europe‑wide network planning centre, housed in the city’s Altmarkt.

The Dresden Hub sits alongside an equivalent in Málaga, Spain, which launched in January 2022. It flagged progress made against its hiring targets, reaching 130 employees across finance, human resources, IT, and security. Its 600‑employee target is expected to be achieved in the next five years. Jesús Amores, Head of the Málaga Innovation Hub, said it has attracted local and international talent, and contributes to Vodafone Group’s broader ambition to recruit 7,000 software engineers in Europe by 2025.

The Málaga site operates with the same model as that of Dresden: partnerships with vendors and local authorities to drive innovation. Larger than the Dresden site, it will eventually hire 600 employees. Open RAN was named the primary focus for work in Málaga (Vodafonewatch, #197, #202, and #204).