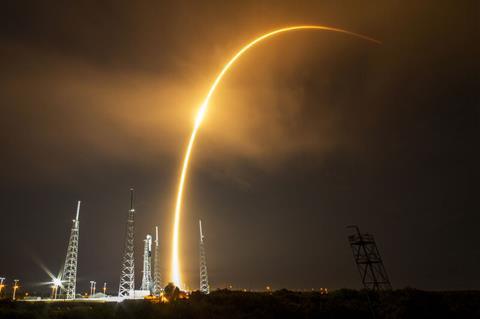 On Saturday, the Falcon 9 rocket launched into orbit from NASA’s Kennedy Space Center in Florida, carrying 34 Starlink internet satellites alongside BlueWalker 3. These satellites will join the growing “constellation” created by SpaceX, marking the 41st launch from the company this year.

BlueWalker 3 is the largest commercial communications array to be sent into space, measuring 64sqm and weighing about 1,500kg. Its spring-loaded antenna will be deployed in several weeks following a series of health checks to ensure the colossal satellite is fit for purpose.

Some 25 cellular service providers are now partnered with SpaceMobile, ten of which are participating in the tests of BlueWalker 3, including Vodafone, which was an early investor in SpaceMobile. The BlueWalker 3 mission will cap off SpaceMobile’s initial development programme and enable integration testing with Vodafone and other MNOs.

BlueWalker 3 is designed to test new technology to provide global cellular service directly from space. The overall aim of SpaceMobile is to fill coverage gaps and offer high-speed phone and data service to underserved areas. As of next year, further satellites are expected to enter production, with at least 100 giant satellites likely to be required for full coverage. The satcomms upstart plans to launch five more operational satellites in 2023.

SpaceMobile recently indicated it was looking at a “wide range” of fresh fundraising options amid mounting costs and delays in the setup of its service.