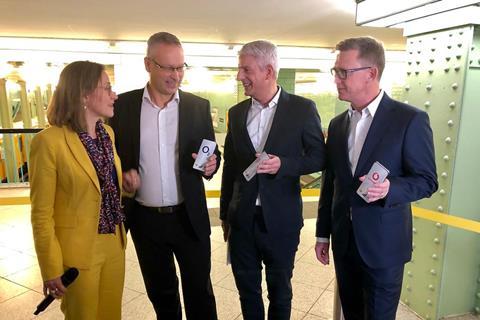 Telefónica Deutschland (O2 Germany) and rivals Telekom Deutschland (TDE) and Vodafone Germany (VfD) announced a network‑sharing arrangement on the joint construction and operation of up to 6,000 mobile base stations, in a bid to save time and money.

The aim is to help eliminate mobile “white spots” in rural areas and along transport routes. In coordinated press releases, the trio declared that a letter of intent had been signed, with 5G new-entrant 1&1 Drillisch invited to participate, and the Federal Cartel Office informed of the plan. Further details of the cooperation should be agreed by spring 2020 at the latest.

The mast‑building plan appears to be the first tangible outcome of the pact agreed by Telefónica, TDE, and VfD with the German government that aims to ensure 4G household coverage reaches 99% in every German state by the end of 2021. In return, the operators secured improved payment terms for 5G frequencies, for which they committed a combined €6.5bn (Telefónicawatch, #136 and #137).

German operators remain disgruntled over the terms of their 5G licences, and Telefónica said they are unified in believing that the requirements imposed are “disproportionate and unlawful”, which is why legal action against the terms are continuing. Pointed reference was made to the multi‑billion euro investment required to meet coverage requirements.

Markus Haas, Chief Executive of Telefónica Deutschland, described the operators’ collaboration as an “outstanding example of intelligent cooperation”, and highlighted the anticipated benefits for the country as a whole. However, the German government appeared underwhelmed by the initial plans.

Government ministers welcomed the news that the three incumbent operators are joining forces to build 6,000 masts, but claimed this was still insufficient to achieve an acceptable level of mobile network coverage across Germany.

Steffen Bilger, Parliamentary State Secretary at the Federal Ministry of Transport and Digital Infrastructure (BMVI), told Stuttgarter Zeitung that the aim of a new mobile strategy — the Gesamtstrategie Mobilfunk — is to spend €1.1bn by 2024 on building a further 5,000 masts, funded by the country’s digital infrastructure fund. This rollout is expected to have short‑term benefits, as well as providing a basis for future networks.

Andreas Scheuer, the Minister of Transport and Digital Infrastructure, reportedly said the additional 5,000 masts would be required to ensure coverage for 99.95% of German households and 97.5% of the country’s terrain.

The mobile communications strategy aims to put Germany in a leading international position with across‑the‑board 4G coverage. This is also an important precondition for the roll out of 5G, where the Federal Republic of Germany aims to become more of a global trailblazer. ”

The proposed state deployment would be carried out by a public infrastructure company, which is to be established in the third quarter of 2020 with a €5m budget for its startup phase. Other reports suggested this company will be a subsidiary of the state‑owned truck toll operator Toll Collect.

Scheuer is also demanding faster approval procedures for mobile sites, with planning permission still pending for 1,000 locations across the country. “We are working under time pressure”, he said. There are “many places where it takes too long to obtain permits. That is why we will be establishing a pilot system with the federal states and local authorities to serve these areas too”.

Meanwhile, O2 Germany has been providing monthly updates on its own efforts to upgrade its LTE network, to better serve and expand its customer base.

In October 2019, it put a further 550 LTE transmitters into operation, serving three million more people, and said more than 60% of German households now have access to LTE speeds of up‑to‑100Mbps on its network. It also noted that the average speed for its customers has improved to 39.2Mbps, up from 30Mbps a year previously.

Improving overall network quality has been an ongoing quest for the operator, following the acquisition and subsequent integration of E‑Plus (Telefónicawatch, passim). O2 Germany recently boasted that it was awarded the grade “Good” in three separate network tests carried out by trade magazines CHIP, COMPUTER BILD, and connect — a feat it claims has never been achieved before (see separate report).

The operating business is developing plans for its next major network investment drive, pushing capital expenditure to around 17%–18% of revenue over the next two years. The programme, which appears to be focused on urban 5G coverage and rural LTE catch‑up, will be considered in detail in a future Telefónicawatch.

O2 Germany flagged a further accord with TDE and VfD that will see all three operators provide LTE services to travellers on Berlin’s underground railway system (U‑Bahn).

O2 Germany revealed back in 2017 that it was leading a joint project, also involving TDE, VfD, and local transport operator Berliner Verkehrsbetriebe (BVG), to enable LTE for all users on the Berlin underground.

In July 2019, it signed another agreement with BVG on the further expansion of the LTE network.

It appears that TDE and VfD are now able to make use of Telefónica’s infrastructure on the first four U‑Bahn lines (U2, U5, U7, and U8) to offer services to their customers.

All three operators are able to provide services owing to the deployment of jointly-operated base transceiver station (BTS) ‘hotels’. The aim is to equip all other lines by end‑2020. The network will also be built in readiness for future 5G services.

Telefónica pointed out that it has been providing LTE services on the Berlin U‑Bahn since 2016.