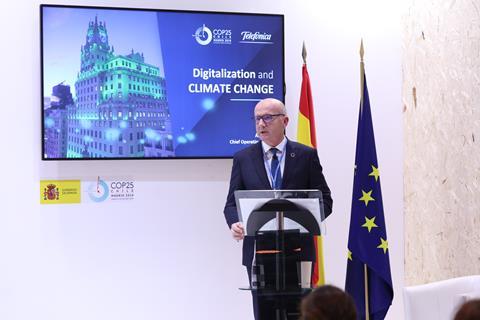 Telefónica is said to have cut its energy consumption per unit of data traffic by two‑thirds over a three‑year period, seemingly balancing out a three-fold increase in data traffic over the period. Digital technologies are suggested to be able to help reduce global carbon emissions by “at least” 15%.

Telefónica Group flagged its listing in the CDP Climate A‑LIST for the sixth consecutive year (Telefónicawatch, #133). The rankings are published by not‑for-profit organisation CDP (formerly known as Climate Disclosure Project). The companies analysed receive a rating from A to D, depending on the effectiveness of the strategy to address factors contributing to climate change, with those providing insufficient information scoring an F. Out of several thousand companies submitting information, a total of 125 companies were A-rated, including Spain-based mobile infrastructure company Cellnex. Telefónica said it was one of only eight telcos in the rankings. Rivals BT Group, Deutsche Telekom, and Orange also ranked in the A‑LIST, while Vodafone Group scored A-.