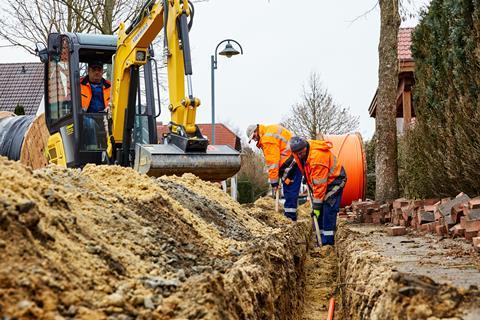 The JV — a spearhead initiative for TDE as it seeks buddies to share FTTP rollout costs, and expand reach — was backed by the Bundeskartellamt as a means to bring “significant improvements” to infrastructure in the area where it will concentrate (EWE’s footprint in Lower Saxony, plus the neighbouring states of Bremen and North Rhine Westphalia).

With the move, TDE gained the “final merger control clearance” it needed for the establishment of Glasfaser NordWest, which will run out of Oldenburg, Lower Saxony. The business announced it was operational shortly after the Bundeskartellamt’s announcement, in January 2020.

Glasfaser NordWest has gone for a joint leadership team comprising two co-Chief Executives. From DT comes Oliver Prostak, previously Head of Market Development at TDE. He will lead the business alongside Christoph Meurer, formerly Director of Strategic Partnerships at EWE Tel, EWE’s communications services arm. The JV has begun life with “about 35” employees.

The move ends a long wait for the somewhat controversial JV’s creation. Plans for the new business were first flagged back in late‑2017 — initially as a central initiative within Deutsche Telekom (DT), before being re-assumed by TDE. It only progressed an application for Bundeskartellamt clearance in March 2019 (Deutsche Telekomwatch, #69 and #82).

Despite the long lead time, TDE is sticking to a previously laid out target of releasing services on Glasfaser NordWest lines sometime in 2020.

In approving the JV, the Bundeskartellamt does not appear to have added significantly to obligations binding how it does business.

Nonetheless, the regulator said EWE and TDE have “agreed to observe certain competitive guidelines”. It did not go into fine detail on these requirements, but was evidently keen to bed down commitments to progress rollout quickly and protect competition.

Now, to get rolling on rollout

Practically, Glasfaser NordWest is expected to act as “general contractor” on line deployment — initially employing EWE and TDE to carry out upgrades in a tightly planned geographical two-year expansion programme, before opening up to bids for involvement by third parties. Those cleared to participate will gain a discount across Glasfaser NordWest’s wholesale service in return.

The investment involved in the rollout — pegged at “up to €2bn” — will be split evenly between the two parents and spread over a ten‑year period. This implies a €100m‑per-year spend load on TDE (considerable, but not huge, given its current, ex‑spectrum annual capital expenditure level sits at around €4.2bn).

The inferred 150,000 premises-per-year rollout is also a helpful boost to TDE as it ramps towards a targeted annual FTTP expansion rate of two million household connections by 2021, but remains under a variety of spend pressures from shareholders, politicians, regulators, suppliers, and citizens (Deutsche Telekomwatch, #74 and passim).