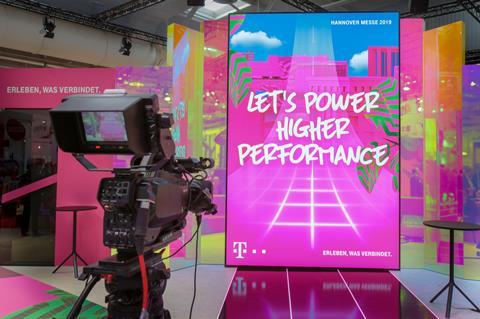 Deutsche Telekom’s (DT) businesses kept a steady ship on choppy Trans‑Atlantic waters with their results in the quarter to 31 March 2019 (Q1 FY19), and thus succeeded in lancing some of the concern surrounding regulatory and economic hazards in key markets.

At face value, the figures presented a ‘business as usual’ picture at DT, with T‑Mobile US (TMUS) keeping its foot firmly pressed down on the throttle, and other segments providing varied sources of positivity.

“Alles gut” declared Chief Executive (CEO) Timotheus Höttges, when opening the Group’s presentation, and the CEO again accentuated that all DT’s operating segments were contributing to performance, progressing further towards the increased consistency and synergy the operator has been searching for over recent years.

The effusive Höttges was even more jovial than usual, but whether he felt fully in command of events was open to question. He was quick to acknowledge the “elephant in the room” of Germany’s 5G auction, and the massive outlay facing the Group once the sell‑off completes (see separate report). With a 28GHz licence sale also continuing in the USA, and net debt now well over €50bn (€54.9bn), balance sheet pressures were loudly bubbling away in the background throughout the results review.

US regulators’ looming decision on the TMUS–Sprint merger, due in June 2019, added to the ‘undercard’ feel of the session. Likening the rocky push for approval to Kneipp therapy, alternating hot and cold water, Höttges said he had undergone the longest spell of such treatment that “ever took place in history”. Nonetheless, he added that he was “sitting in the bathtub and enjoying it”.

DT’s Q1 results emphasised the solid operational ramparts that DT has built to fend off current and coming challenges, especially compared with European peers that are lacking (or have unwisely jettisoned) North American strongholds or other safe harbours.

If DT still stoops to measure itself against European rivals, rather than seeing itself in the global Big League, leadership will likely have noted ongoing top‑line struggles at competitors such as Telefónica (which posted a 1.7%‑reported drop in revenue during Q1) and Vodafone (‑4.4% for its equivalent quarter) with another silent ‘thank you’ to lady luck for previous failures to sell TMUS and exit the USA.

Segments getting on the same page

DT continued to build more harmony into the largely one‑track, USA‑reliant tune it has been playing over recent years. Revenue growth was achieved in both Germany and Europe, in alignment with the slight forward movement guided for both segments at the start of the FY (Deutsche Telekomwatch, #81). Similarly, Q1 saw all major divisions post rises in earnings before interest, taxation, depreciation, and amortisation (EBITDA), delivering on the universal forward movement DT is targeting for the twelve months. This helped the Group post an 18.1%‑increase in underlying free cash flow, to €1.6bn.

Nonetheless, TMUS continues to be the star of the show, and other segments still largely confined to providing backing vocals.

Benefiting from continued strong commercial performance and renewed strengthening of the dollar, seen since FY18, the US NatCo put other divisions in the shade with double‑digit increases in revenue and EBITDA (15.9% and 14.9%, respectively).

DT’s “Trans‑Atlantic” nature remained a key feature of its results. If TMUS had produced just €82m more in sales during Q1, it would have outweighed the combined revenue of Telekom Deutschland (TDE), T‑Systems (T‑Sys), and the Europe division on its own. This milestone has long been in the pipeline — and it will be interesting to see whether TMUS can achieve it in Q2 (possibly its last chance as a standalone entity if it secures regulators’ clearance to add Sprint’s revenue to its top‑line).

While detailed strategic discussion was minimal, the Q1 session did see a brief signal from Höttges that DT is set to place particular onus on customer retention over the coming months — which could be read as a signal that Group leadership has identified some competitive threats coming over the horizon.

No context was offered, but Germany appears a key focus. In recent quarters, TDE has been successfully reducing mobile churn (to 1.1% in Q1 from 1.6% a year earlier), but in the fixed‑line market, line losses have been accelerating and broadband user growth decelerating. Höttges raised customer experience and service quality as areas where TDE still has “a lot of things to do”.

“I want to see a little bit more that we appreciate the base — our customer base — in an even stronger way. So, the loyalty, the focus on the base, the churn is something which is very relevant for me for this year. ”

US powers on; flux in Germany; T‑Sys yet to prove execution

Segment-level trends were largely the same as other recent quarters, with TMUS leading the way and other divisions in the slipstream.