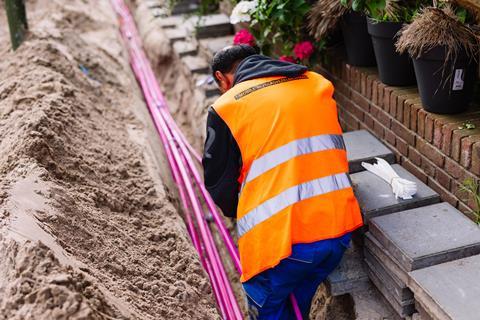 Telekom Deutschland (TDE) started testing a new fibre-laying method developed by Austrian supplier Layjet Micro‑Rohr. The trial is taking place in Nuremburg with the aim of covering 400 households, and is being conducted in collaboration with the Technical University of Vienna.

Layjet Micro‑Rohr hails the process as “revolutionary”, claiming that operators can reduce costs by 30%–50% compared with traditional methods, depending on the nature of the soil into which they are laying the fibre. Planting of up to 3km of fibre per‑day is purportedly possible with Layjet, instead of the relatively slothful 300 metres found with existing cable‑laying techniques.

Layjet Micro‑Rohr claimed that through “sophisticated use of modern cutter technology”, it is possible to lay ductwork directly in the road shoulder without permanently affecting the primary road structure. As such, high reconstruction costs are “almost completely excluded”. Other benefits are lowering of noise and dust pollution, and reduction of traffic obstructions.

According to Layjet Micro‑Rohr’s website, an excavator prepares the road shoulder for the use of the Layjet milling machine. Then, in a “single work step”, the machine cuts a small slit trench, lays the pipes, and closes the resulting trench with the excavated and processed material. An integrated travelling formwork device protects the slit trench from falling material during the entire laying process, ensuring the road structure remains completely stable. Right after the laying process, a specially developed multi‑layer compacting method gives the road shoulder the same load bearing capacity it had before.

Get smarter than micro-trenching

With local red tape continuing to hinder network construction projects, TDE appears keen to look beyond ‘micro-trenching’ to reduce costs of laying fibre in the ground.

In October 2018, the NatCo teamed up with the Fraunhofer Institute for Physical Measurement Techniques (IPM) to apply artificial intelligence (AI) technology to the planning of fibre-to-the-home (FTTH) rollout (Deutsche Telekomwatch, #76).

In a pilot conducted in Bornheim, near Bonn, a measuring vehicle equipped with 360‑degree cameras, GPS, and laser scanners was used to collect detailed environmental data. Roughly 5GB of surface data was gathered per kilometre, and then analysed via software developed by Fraunhofer IPM. The software is designed to automatically recognise, localise, and classify relevant objects in the measurement data. AI and machine-learning algorithms, again developed by the research institute, are then used to work out the optimal route for laying fibre.