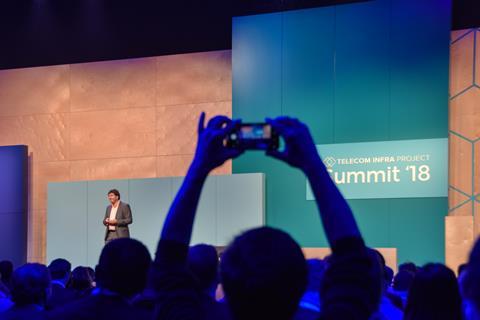 Axel Clauberg, Vice‑President of IP End-to-End & Infrastructure Cloud at Deutsche Telekom (DT), lauded progress made by the Telecom Infra Project (TIP) — the open source network infrastructure project he oversees as Chairman. In a blog post published to coincide with the third annual TIP Summit, Clauberg claimed that many of the technologies being worked on by TIP were now “closer to maturity”.

As part of a wider TIP update, he flagged five project groups as having technology trials taking place with operators:

“In addition to these trials, three leading operators — Deutsche Telekom, Telefónica, and Vodafone — have demonstrated the potential for flexible tech to improve network speeds, capacity, and efficiency by announcing that they have started request for information [RFI] processes to investigate how they can adopt TIP technologies, which are supported by a growing ecosystem of vendors and manufacturers. ”

In his keynote at the TIP Summit ’18, Clauberg’s message was that output from TIP’s various project groups had increased considerably since the previous event, and that more technologies were moving beyond the “concept stage”. He told attendees that, if all goes to plan, the industry should see the first commercial deployments of TIP‑developed technology during 2019. Mass-market rollouts are slated for 2020.

Perhaps not unrelatedly, there was a hint in Clauberg’s speech of a less combative stance towards established vendors in the way TIP’s operator backers are seeking to develop new technologies — something that has also been evident in the tone of some other DT executive comments over the course of the last year (Deutsche Telekomwatch, #71).

“Our industry is actually desperate for more innovation. We definitely need to accelerate the pace of innovation. I [am not saying] that traditional vendors don’t do enough on innovation. However, as a community, we can be much, much better — bringing people from the established vendors, from startups, from systems integrators, from internet companies, and from the telcos, together to collaboratively work on the telecoms infrastructure. That’s what we do within TIP. ”

Alongside the prospect of greater go-to-market activity around TIP technology, it is evident that working ties between DT and TIP are becoming closer.

For all Clauberg’s enthusiasm about TIP’s progress, only one of the five project groups he mentioned — mmWave Networks— sees DT as playing a prominent role (see table). DT has often followed different paths to upend traditional supply chains through ‘disaggregation’ of software and hardware — the same aim of TIP — most notably in RAN virtualisation.

Further, according to Light Reading, a closer partnership between TIP’s OpenRAN Project Group and the DT‑backed ORAN Alliance is on the cards. Clauberg explained that Telefónica Group and Vodafone Group, two operators heavily involved with OpenRAN, have an incentive to pool efforts and base their work on the xRAN specification developed within ORAN.

“[Telefónica and Vodafone] have not done any specs from the ground up. They have not built architecture, but are looking at how the architecture specified by the ORAN Alliance could be built and deployed in a commercial way. In this area, TIP would do solutions integration and prove it is possible to build such an open RAN in real life. ”

There already appears scope for cross-fertilisation between the two groups. Altiostar and Mavenir, original supplier members of the xRAN Forum (which was recently folded into ORAN — Deutsche Telekomwatch, #71), have emerged as leading candidates within OpenRAN to produce interoperable RAN solutions.

The xRAN Forum was founded on the desire to shake up operators’ RAN supply chain, and spurred on by possibilities opened up by technologists at Stanford University. Its mission is to develop an “open alternative to the traditionally closed, hardware‑based RAN architecture” (Deutsche Telekomwatch, #65 and passim). To achieve this, it aimed to: untether the RAN control plane from the user plane; “modularise” the two systems; and introduce open interfaces to enable faster and wider applications development for both elements. In short, the goal was to boot out from the RAN, wherever possible, “static and highly proprietary” kit.

The ORAN Alliance was unveiled at the 2018 edition of Mobile World Congress in Barcelona, and continues on this disruptive path. A merger of the DT-backed xRAN Forum and China Telecom-supported C‑RAN Alliance, ORAN aims to turn radio units into ‘white boxes’ running open software. By using common, off‑the-shelf hardware and merchant silicon, the idea is to minimise the use of proprietary hardware. Artificial intelligence and real-time analytics were also flagged as important, suggesting that ORAN has a much broader remit than its xRAN and C‑RAN predecessors. Although the ORAN Alliance is open to all operators, not all industry big-hitters are on board. Notable absentees include Verizon Communications and Vodafone.

Clauberg no doubt welcomes consolidation of the sort seen in the “open RAN” space. Prior to the TIP Summit, he warned against the time‑wasting risk of duplicating research efforts through too many industry groups.

This may seem a bit like the pot calling the kettle black, with DT having helped drive growth of the tangled web of initiatives that has emerged over recent years — as well as perhaps reflecting how the Group is now seeking to direct how these various schemes evolve in the future. DT has thrown its weight behind various open source initiatives in recent years, including FD.io, Open Central Office Re-architected as a Datacentre, Open Daylight, Open Network Automation Platform, Open Networking Foundation, and OpenStack (Deutsche Telekomwatch, #58 and passim).

Neither is DT averse to striking out on open source and ‘cloud-native’ projects that do not command, at least initially, broad industry support. In September 2018, DT and US‑based Aricent announced the creation of an Open Source Edge software framework. It is designed especially for developers in the sphere of cloud‑native multi-access edge computing technologies. The goal is to intersect with the deployment of 5G‑enabled network edge facilities targeted at delivering ultra-low latency network applications (Deutsche Telekomwatch, #76).

Some industry‑watchers saw a parallel between DT’s tie‑up with Aricent and a recent launch of the Akraino Edge Stack, a Linux Foundation Project, of which DT is now closely aligned. The goals of Akraino, namely to build an “open source software stack that supports high-availability cloud services optimised for edge computing systems and applications”, seem similar to the ones espoused by DT and Aricent.

Terragraph gets airing in Hungary, RFI in pipeline

Working within TIP’s mmWave Networks Project Group, DT subsidiary Magyar Telekom (MT) published a case study about trial deployments of Terragraph technology. Developed by Facebook, Terragraph is pitched as a fixed wireless access alternative to fibre, and was flagged as being on DT and MT’s radar earlier in 2018 (Deutsche Telekomwatch, #71).

Both DT and MT also partnered with Facebook on rollout in two trial locations in Hungary: the town of Mikebuda was selected for the first pre-commercial trial, and the town of Marko as the second location. The Mikebuda pilot began in May 2018, and the Marko trial in October 2018. Clauberg said DT plans to issue an RFI on the technology “in the next months”.

There are two working groups within the mmWave Networks Project Group: the Channel Modelling working group; and the Customer Premises Equipment and Service Integration working group. At a recent three-day ‘networks’ workshop held in Berlin, Clauberg said the former was working on propagation characteristics in different environments and weather conditions. The aim is to share findings to enable industry to design “more robust and higher performing” mmWave networks (Deutsche Telekomwatch, #76).

On the customer premises equipment (CPE) front, the aim is to publish draft requirements and prototype designs of future CPE hardware, covering design aspects such as dimensions, installation, and placement.

TIP further reported that a group of German investors, including Deutsche Telekom Capital Partners (DTCP), the investment management arm of DT, had joined what it called a “global network” of TIP Ecosystem Acceleration Centre (TEAC) investors in France, South Korea, and the UK. Together with Capnamic Ventures, Cinco Capital, Coparion, Freigeist, and High-Tech Gründerfonds, DTCP has “soft circled” €100m in funding for TEAC‑related activities. This may be an evolution of a €100m, TEAC-oriented facility also referenced back in 2017.

The move builds on DT’s existing support for ecosystem-building activity at TIP. It is one of several operators worldwide that provide TIP Community Lab facilities (collaborative working environments) for operators and startups. DT set up one in Berlin during 2017 (Deutsche Telekomwatch, #66).

DT also runs a TEAC in Germany, comprising testing facilities in Berlin and at the Group’s headquarters in Bonn (Deutsche Telekomwatch, #72). The opening of DT’s TEAC came on the heels of other similar centres established by BT (London), Orange (Paris), and SK Telecom (Seoul). TEACs are aimed at giving a helping hand to startups focused on network infrastructure innovation.

Three startups initially joined DT’s TEAC, after making successful pitches to a panel of experts from DT, TIP, and Facebook. These comprised: Airrays, a Dresden-based startup focused on smart antennae with beamforming and tracing capabilities; the Berlin Institute for Software-Defined Networks, which has developed generic acceleration architecture for cost-effective scaling of virtualised infrastructure; and an offshoot from R&D at Imec, a Belgium-based innovation hub, which concentrates on interoperable 60GHz active phased-array antenna technology to enable carrier-grade outdoor links with off‑the-shelf WiGig transceiver chips.