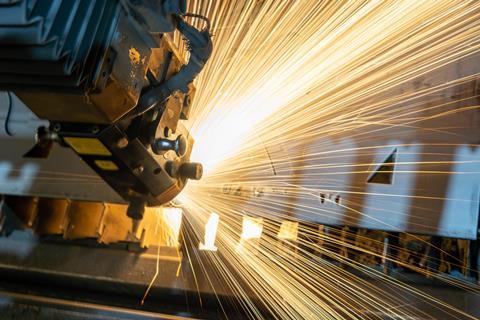 Cosmote Greece highlighted a collaboration with infrastructure vendor Ericsson on the delivery of private network technology at a factory complex owned by solar energy specialist Calpak in Loutraki, near Cornith. The deployment is pitched as the first of its kind in Greece.

Calpak’s factory — a 4000 square metre site manufacturing solar water heating equipment — is being powered by Cosmote’s “licensed spectrum”. The promise is that “near-zero latency”, “high-capacity” 5G will improve productivity in the factory; so much so that Calpak hopes it can leverage operational efficiencies to expand internationally.

On top of the network, the project aims to harness Industrial Internet of Things (IIoT) and augmented reality technology from US‑based industrial software provider PTC (an existing T‑Systems industrial tech partner — Deutsche Telekomwatch, #79), as well as connected-robotic arms from Gizelis Robotics. Data will be collected from these appliances, and analysed, to enable a “series of innovative applications” such as remote production monitoring, predictive maintenance, and expert guidance.

The deployment builds on Cosmote’s existing relationship with Ericsson, the operator’s exclusive 5G radio network partner and DT’s strategic ally on private enterprise networks. It follows closely after the NatCo’s 5G launch, which took place in December 2020 after completion of Greece’s 5G spectrum auction and brought coverage — albeit limited — to the cities of Athens and Thessaloniki (Deutsche Telekomwatch, #90 and #101).

Cosmote appeared to talk up the prospect of further campus network deployments in Greece, in keeping with the Group’s gradual, ongoing private wireless expansion in Europe. Deployments — whether pilots or full launches — have now been flagged in Austria, Croatia, Czech Republic, Germany, Hungary, and Slovakia (Deutsche Telekomwatch, #101 and passim).

The announcement did not disclose which of DT’s campus network products are being utilised by Calpak — or whether Cosmote Greece has developed its own custom products and services line. Nor were details provided on what band of spectrum the campus network was running on.