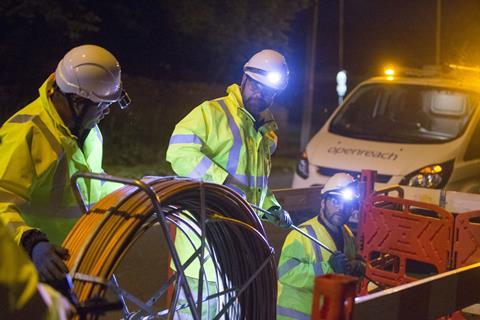 Ofcom issued a consultation on its plans for future regulation of full and partial fibre services in the UK, featuring a two-tier proposal hoped to encourage broader and more intense fibre-to-the-premise (FTTP) deployment by Openreach, while also creating headroom for the UK’s fibre altnets to make an investment business case.

The proposed changes from Ofcom laid out in the Promoting Competition and Investment in Fibre Networks proposal document are due to come into effect from 2021, and apply for a five-year period (up from three years as part of efforts to offer longer-term certainty on pricing for the sector). Ofcom considers that the UK can be divided into two broad categories:

After identifying these two major categories, the key changes the Ofcom proposals are currently expected to create are as follows:

Giving altnets tools to fight, and Openreach freedom to race

In setting out the regulated fibre investment plan, reference was made to Ofcom’s Physical Infrastructure Market Review, which is expected to lead to unrestricted access to Openreach ducts and poles being made available to altnets as a crucial element of creating an environment in which new entrants can expand in the market (BTwatch, #300).

In maintaining unrestricted duct and pole access, and planning for enforced access of Openreach dark fibre, the regulator appears to be giving altnets what it considers to be the tools they will need to compete with Openreach in providing next-generation services. Meanwhile Ofcom is also freeing up Openreach to invest and deploy fibre as it sees fit across most of the country, and making it easier for the BT business to make the level of return needed to bring full fibre to more remote or rural areas of the UK. At this stage of the consultation process it remains to be seen whether the proposed environment would provide a framework for a fair fight, but BTwatch suspects that BT will be happy with the plan. While not entirely giving the incumbent licence to accelerate FTTP by any means necessary, Ofcom certainly appears willing to risk the prospect of Openreach largely dominating in the provision of FTTP services in exchange for faster progress in reaching widespread full-fibre availability.

Altnets told to toughen up

Ofcom acknowledged that encouraging Openreach fibre investment could clash with altnet investment plans, and that there is a risk that the BT business will change its own rollout plans to counter the rollout plans of its emerging infrastructure rivals. While expressing some sympathy regarding this risk, the regulator noted that Openreach is producing a degree of mid-term visibility of its investment plans for fibre deployment.

The regulator also stated that Openreach deciding to respond and build in areas targeted by altnets would help create an environment where there are multiple networks offering competing services which helps support its goal of competition at infrastructure level. Ofcom further suggested that an assumption that a major rival such as Openreach could join the fray in their chosen markets should be factored in to any business plan adopted by an altnet.

Ofcom has identified three principle ways in which it believes regulation can be applied to foster fibre deployment:

Ofcom’s planned 40/10 price controls are likely to mean that the cost to end-users of anchor superfast services will be higher than the prices that they would see in an unregulated market. However, the higher costs are said to be justified due to the longer-term benefits to consumers and business that are anticipated from the proliferation of full fibre services.

Sky shopping around for fibre, as Openreach competition intensifies

Recent speculation suggests that BT and Openreach should be bracing themselves against growing competitive pressure from rivals, as they galvanise themselves to improve the UK’s current position as fibre laggard.

Sky has reportedly approached providers that are building fibre-to-the-premises (FTTP) networks to rival that of Openreach, in an attempt to accelerate the roll out of fibre-based broadband services across the UK.

The Telegraph said Stephen van Rooyen, Chief Executive of Sky UK, is in contact with fibre altnets such as CityFibre, TalkTalk’s FibreNation venture (BTwatch, #301), and Hyperoptic, although any talks are not expected to include discussion of joint investments in infrastructure, but rather focus on wholesale arrangements. Worth noting is that Sky is already listed as a wholesale customer of FibreNation, along with TalkTalk (BTwatch, #303).

Although Sky, which is understood to have around six million broadband lines, signed a discount wholesale arrangement with Openreach in 2018 (BTwatch, #299), the report has led some to wonder if the satellite provider could eventually jump ship from Openreach to the rival platforms, although such a move would be far from imminent. Indeed, ISPreview said “credible sources” suggest that Sky intends to launch FTTP plans based on the Openreach network in the second half of 2019, following the launch of G.fast offerings in spring 2019, although nothing has apparently been confirmed by Sky. If Sky does plan to cosy up to the fibre altnets, then G.fast may also prove to be of waning interest to the provider.

Meanwhile, The Telegraph also reported that Virgin Media parent Liberty Global is considering opening up its cable network to rivals for the first time – something the provider has been reluctant to do in the past.

The report suggests that Virgin Media is seeking ways to counter the challenge of the growing number of fibre deployments in the UK as noted above. It may also ease regulatory pressure, with BT regularly noting in communications with Ofcom that infrastructure-sharing obligations are not imposed on Virgin Media, putting Openreach in an unfair competitive position where the networks co-exist (BTwatch, #219 and #223).

Kirkman disclosed the details as part of a presentation given to a seminar, called Fibre To The New Home, run by the Independent Networks Co-operative Association (INCA) in Cardiff during April 2019.

He also revealed that the access services division is forecasting that 99% of new builds will be connected via FTTP by 2023-24, up from the current 84% (and 59% in 2018-19). Kirkman added that 88% of the 240,000 new builds Openreach has connected over the past twelve months have opted to install FTTP, with 11% connected via fibre-to-the-cabinet (FTTC), and less than 1% to copper.

Although the Fibre First project is the high-profile public driver of the increased full-fibre rollout, BTwatch has previously noted that a substantial chunk of the weekly figure is coming from new build sites, as well as existing Broadband Delivery UK programmes.

According to Kirkman, since February 2016, Openreach has contracted to connect around one million new builds to ‘fibre broadband’, through 14,000 developers. When completed, 840,000 of these sites are expected to use FTTP technology, with the installation of almost half of the connections to be managed by the developers and their contractors, thereby qualifying as self-installs.

Openreach is signed up to a government-led voluntary agreement with construction trade industry association the Home Builders Federation to offer all new housing developments the opportunity to connect to ‘superfast’ speeds of at least 24Mbps via FTTC, and, where possible, provide FTTP infrastructure for all new developments of 30 properties or more (BTwatch, #274 and passim).

In November 2018, Openreach began offering incentives to encourage house builders to deploy FTTP in developments with fewer than 30 premises, reducing the cost of installing the technology in small-scale housing developments by 75% on average (BTwatch, #300). The access services division, which already installs FTTP at no additional charge to all new housing developments of 30 or more homes, indicated that it previously charged up to £25,000 per site for developments of between two and 30 homes.