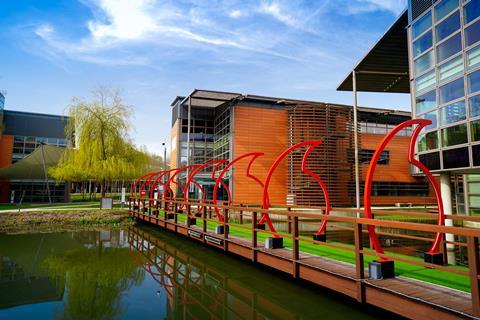 Vodafone UK has confirmed a permanent shift to “blended working” practices across its UK footprint, enabled through repurposed office space and a change in ownership at its flagship The Connection Newbury headquarters.

In September 2021, a six‑month “blended working” trial was initiated which saw employees pilot three working models: home‑based, field‑ or site‑based, and blended. These options will now be rolled out to 10,000 UK employees.

Human Resources Director Clare Corkish described it as an “exciting time for Vodafone UK” which will be underpinned by “flexibility and trust”.

“ With our new approach, we’re confident that we can give our teams a great working environment with flexibility to suit them, recruit from more parts of the UK from now on, and continue to improve the service we provide to our customers. ”

She said that “forced” changes during the pandemic in the past two years enabled Vodafone to “learn a lot… and make some big improvements to the way in which we work”.

The pilot, backed by inhouse technologies such as Vodafone’s Business Office Spaces digital booking tool and its ‘office‑in‑a‑box’ home‑working toolkit, received positive employee feedback. When rolled out on a permanent basis, employees will be able to choose a preferred working model, dependent on the requirements of their roles and responsibilities.

Optimised for the new normal

As such, Newbury’s The Connection is now on the market. Vodafone UK is looking to sell the freehold for the site in favour of a long‑term leaseback agreement. Colliers, Vodafone’s exclusive real estate advisor, is leading the sale.

The operator will then “re­‑invest funds back into our business to better serve our customers”, according to David Fry, Head of Property at Vodafone UK. Fry said it would “ensure optimal use of the campus” and enable greater investment to create spaces more suited to hybrid working practices — often referred to as ‘Future Ready’ in Vodafone circles.

By way of pre-empting concerns about a Newbury withdrawal, Vodafone noted that it “remains committed to a long‑term presence as a major employer in the town”. The Connection has 468,270sq ft of office space, split across seven buildings. Under the plans, Vodafone will remain in four of the buildings, while three others — a combined 210,492sq ft of office space — will be made available for occupancy or redevelopment by external parties.

Not just a Newbury thing

Vodafone will move into “new office spaces” in the Manchester and Newark as part of an initiative to “resize its property footprint”. The offices will act as regional hubs. Assurances were made that the move would not mean roles are lost.

Meanwhile, Vodafone confirmed plans to transform its Stoke‑on‑Trent Festival Park office into a contact centre with training facilities. The site will include an “academy for future franchise partners” and offer training for customer service and retail teams.

There, a further 300 roles will be created, taking the Stoke team to more than 900. Jon Shaw, Head of Sales Channels at Vodafone UK, said that the decision to expand the Festival Park site was “a reflection of the fantastic results that the team in Stoke‑on‑Trent has been delivering for us”.

When Vodafone was first forced to close its offices under the UK’s 2020 lockdowns, Chief Executive Nick Read made public his thoughts on changing working norms. He said the Group was looking to do away with “obsolete” offices, and was set to instead prioritise a “hybrid” future.

By late‑2020, a floor of the Group’s Paddington HQ was reworked to pilot new designs better suited to hybrid working. Similar initiatives were rolled out in the Czech Republic, Hungary, and the Netherlands as part of the ‘Future Ready’ campaign (Vodafonewatch, #191 and #193).

‘Future Ready’ still requires real estate, though. Earlier in 2022 reports emerged that Vodafone was in the market for more London office space to accommodate for its in‑house digital services hiring spree. Again, Colliers was reportedly hired to lead the search for an additional 40,000sq ft of space in the capital.