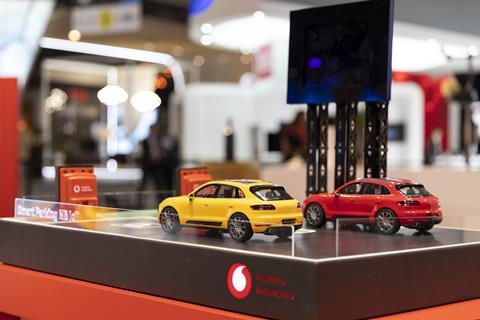 Looking from the top down, Vodafone’s Q2 results showed some progress and appeared sufficient to satisfy the leadership’s City audience, seeing the Group’s share price rise 3% on the day of release.

Read had previously flagged that a “gradual recovery” in service revenue was coming in Q2 (Vodafonewatch, #178), helped by the more retention‑focused commercial strategy he has instilled since moving into the top job — and that proved to be the case. ‘Organically’ — i.e. factoring out M&A and currency movements — Group service revenue rose 0.7%, to €9.6bn (£8.0bn). This returned Vodafone to forward gear after two consecutive quarters of service revenue contraction, which had been fuelled by ongoing difficulties in Italy, Spain, and elsewhere (Vodafonewatch, #175 and #178).

At the same time as being a little insipid, the Q2 growth figure was heavily caveated, excluding disaster-prone-but-deconsolidated India joint venture (JV) Vodafone Idea (VfI) and hiding a patchy record across geographies and segments.

None of the Group’s major Europe Region OpCos achieved growth (see separate report). The key metric of Europe Region contract mobile churn improved by 1.6 percentage points, reduced to 14.5%, but it was notable that Read in his commentary stressed that Vodafone had produced a “more consistent commercial” — if not yet “financial” — “performance”.

Trends at OpCo enterprise units and central arm Vodafone Business also appeared mixed, with strong sales expansion being recorded at the now-IBM-wedded Cloud & Hosting unit (+16.2%) for H1 but sister growth engine Vodafone IoT seeing a dip (to +5.4%), after being hit by an unquantified “slowdown” at subsidiary Vodafone Automotive. Small business customers’ tendency to economise by shifting to consumer plans was also reiterated as a drag, although Vodafone claimed to be seeing success in combating the trend.

Naturally, Read and Della Valle continued to highlight their focus on improving efficiency, led from their Group Finance power base.

Across H1 FY19–20, Vodafone ensured a repeat of Read’s favourite trick of growing earnings before interest, taxation, depreciation, and amortisation (EBITDA) faster than revenue (1.4% organically, to €7.1bn). As such, margin advanced 70 basis points, to 32.4%.

Capital expenditure (capex) was largely steady across H1, at €3bn, and it was clear that Vodafone will be seeking to retain a strong grip on spend as it enters a new strategic cycle (see below), with wiggle room continuing to diminish.

Cash pressures kept the top duo’s savings and asset utilisation initiatives to the fore in the results’ discussion. H1 data saw the impact of Vodafone’s recent four‑country Liberty Global business buyout hit the Group’s balance sheet for the first time, with net debt jumping to €48.1bn. Earlier in 2019, Della Valle stressed leverage reduction will be Vodafone’s focus for the “next few years” (Vodafonewatch, #178).