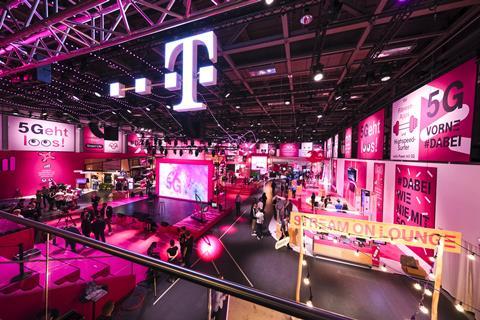 Deutsche Telekom (DT) put a shot across Vodafone’s bows by indicating that it is planning to license the Magenta brand outside of its operating footprint, to generate more revenue and build on existing procurement and roaming collaborations.

He seemed encouraged by the response to 2019’s rebrand of DT’s T‑Mobile Austria business unit to Magenta Telekom, and said DT could use the more colourful marque not only for its own OpCos but also external partners (Deutsche Telekomwatch, #74 and #75). “I am convinced that our Austrian success can be an example for our other national companies, wherever they can also present convincing and substantial narratives”, Schwingen said. He added that “‘Magenta’, unlike ‘Deutsche Telekom’, is something we can license, and earn money with, even outside of our original footprint”.

Schwingen’s comments add to various signals that DT could be upping plans to emulate Partner Markets in other areas where it supports cross-operator collaboration.

Telefónica is another international operator that has been making Partner Markets-type plays. The Spanish group operates a number of businesses in Europe and Latin America, using the: O2 brand in Germany, Spain, and the UK; Movistar in Argentina, Chile, Colombia, Costa Rica, Ecuador, El Salvador, Guatemala, Mexico, Nicaragua, Panama, Peru, Spain, Venezuela, and Uruguay; and Vivo in Brazil.

Telefónica launched its Partners Program in 2011, although this is regarded as more focused on procurement and research than branding. In March 2019, Telefónica said the Partners Program covered 65 nations and 1.8 billion users. Recently, the Spain‑based operator indicated that it is working to place its Hispanoamérica operating businesses on the same footing as Partners Program operators (Telefónicawatch, #140).

Furthermore, Telefónica has started to use the Terra Fibra brand in Brazil for fibre broadband franchises, taking coverage to areas outside its footprint with small communication providers. Also worth noting is Telefónica’s Telco4Telco Group wholesale initiative, which aims to offer Telefónica products and platforms to other smaller operators (Telefónicawatch, passim).

Brand: a nice earner for Vodafone

Vodafone’s Partner Markets federation was originally set up in 2002, and while it has been decreasing in reach over the past decade or more, it still boasts around 29 partners in 42 countries. Recent additions include Vodafone Cook Islands (see separate report) and Vodafone Oman, a new entrant due to begin operations in the Sultanate later in 2020 (Vodafonewatch, #179).

Among these associates, ten use the Vodafone brand — although these tend to be either former Group businesses (and so may be in transition) or very small operators that desire the added clout of such a well‑known brand. They are: Airtel‑Vodafone in the Channel Islands; Vodafone Cook Islands; Vodafone Faroe Islands; Vodafone Fiji; Vodafone French Polynesia; Vodafone Iceland; Vodafone New Zealand; Vodafone Oman; Vodafone Qatar; and Vodafone Ukraine. With the Group in retrenchment mode, other markets could be added in future — such as Egypt, where the proposed sale of the Group’s stake in Vodafone Egypt to Saudi Telecom Company is described as the “basis for a long-term Partner Markets agreement” (Vodafonewatch, #182).

The Vodafone brand is also used by joint ventures such as Vodafone Hutchison Australia (VHA), Vodafone Idea (VfI) in India, and VodafoneZiggo (VfZ) in the Netherlands — and the Group generates a not‑insignificant revenue stream from these tie‑ups. Documentation seen by Vodafonewatch indicates that, in the year to 30 March 2019 (FY18–19), Vodafone charged VHA €16m (£13.4m), VfZ €30m, and VfI €16.2m for ‘brand-related services’ (despite VfI being set up in August 2018, part way through that financial year). Overall, Vodafone brand revenue amounted to €605.4m in FY18–19. This figure includes brand licensing to “OpCos, affiliates, and partner networks” of Vodafone, so includes significant internal re‑charging.

In Australia, where VHA is awaiting the green light to merge with rival TPG Telecom, the operator has indicated that, once merged, it will “operate a number of market‑leading brands and will continue to invest in developing each of its existing brands”, suggesting that the Vodafone brand will be around in the country for a while yet.