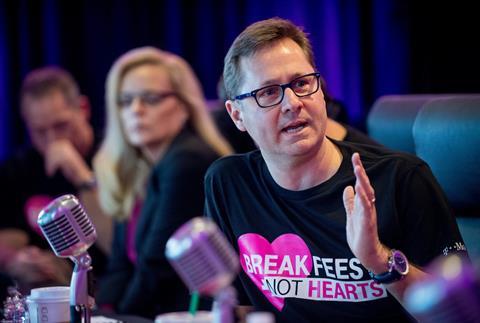 New T‑Mobile US (TMUS) President & Chief Executive (CEO) Mike Sievert oversaw his first results call since moving into the NatCo’s top job, and spent much of the hour and a quarter-long session seeking to re‑frame a “crazy” three months.

With the quarter to 31 March 2020 (Q1 FY20) seeing the first fallout from COVID‑19 hit TMUS’ operations and customers, and executives simultaneously rushing to wrap up its mega-merger with Sprint (Deutsche Telekomwatch, #92), this was anything but a seamless transition into the new Sievert era.

The tone of the Q1 call was pretty much the same as before his appointment, however, with mingling-in of questions from Twitter and TMUS’ cadre of top executives continuing to feed the T‑Mobile underdog legend.

Sievert also enthusiastically took up the mantle of predecessor John Legere in taunting of main rivals AT&T and Verizon Communications.

In his opening statement, he slipped in the claim that the Sprint transaction — completed just after the close of Q1 — had seen opposition from the USA’s traditional telecoms big two, given the challenge presented by a bulked‑up and transformed TMUS. Highlighting the spectrum gains the NatCo was making by amalgamating Sprint, he said it was “no wonder they spent the last two years fighting the merger behind the scenes”.

Publicly, at least, AT&T and Verizon tended to present themselves as relaxed on the Sprint–TMUS combination — and certainly not opposed from the off, as suggested by Sievert.

When the deal was announced in 2018, then-Verizon CEO Lowell McAdam told The Seattle Times that “we frankly don’t care” whether it received a go‑ahead from regulators, and successor Hans Vestberg told investors earlier in 2020 that the operator’s strategy was “agnostic to whatever outcome” came out of the approval process. In late‑2018, New Street Research cited AT&T CEO Randall Stephenson as suggesting he was supportive of the merger if it proceeded as originally laid out — but not if strings were attached that strengthened a competitor (as ultimately happened with mid‑2019’s Department of Justice ruling, seeing assets divested to Dish Network — Deutsche Telekomwatch, #89).

If AT&T and Verizon were actively seeking to stymy the transaction, this adds a bit more needle to Deutsche Telekom’s (DT) recent suggestions that the deal went through with a lower-than-expected legal and regulatory burden (Deutsche Telekomwatch, #92).

CV19 and Sprint merger combine to speed up change agenda

The Q1 presentation saw TMUS executives do more AT&T‑ and Verizon‑bashing as they reiterated growth plans for the scaled-up New T‑Mobile and sought to stress the “temporary” nature of COVID‑19 disruption. Nonetheless, it is clear the NatCo’s refreshed leadership team is faced with a huge range of moving parts to manage for the foreseeable future. Takeaways from the call included: