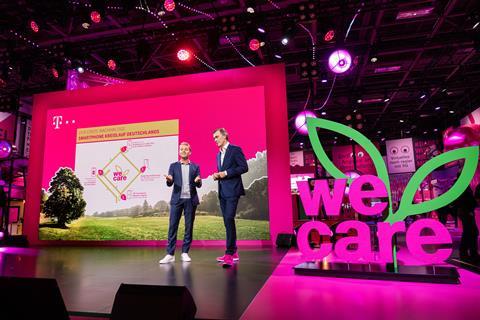 Telekom Deutschland (TDE) made a determined effort at the Internationale Funkausstellung (IFA) trade show to reassure investors and analysts that it had no shortage of ideas regarding how to retain and attract broadband customers. The NatCo, which is under major pressure in the broadband market, announced commercial availability of the long-awaited Smart Speaker and accompanying Hallo Magenta voice assistant, developed in collaboration with Orange (Deutsche Telekomwatch, #81), while more products and services were added to TDE’s Magenta SmartHome range. Wi‑Fi optimisation, to improve signal strength throughout the house, was another development.

IFA, held in early-September 2019, was a timely event for TDE. Only a few weeks before the trade show, when Deutsche Telekom (DT) reported its results for the quarter to 30 June 2019 (Q2 FY19), shareholders appeared to be spooked by DT’s concession of “softness” in Germany’s wireline broadband market (Deutsche Telekomwatch, #86). TDE’s net broadband adds have been on a slide for several quarters, while cable and telco competitors have maintained a higher rate of expansion.

TDE launched various home-based products and services at IFA, ostensibly designed to reduce churn within its residential user base.