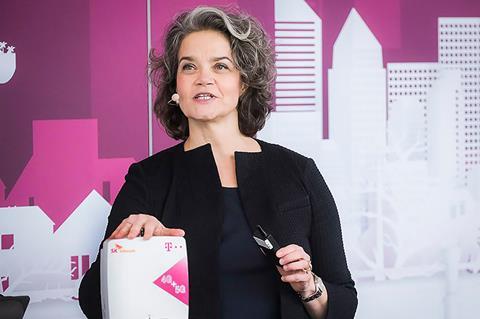 According to Korea IT Times, SKT started installing the 5G repeaters in South Korea’s “major buildings” in 2019. Through work conducted by the JV — which Deutsche Telekomwatch assumes is a 50:50 arrangement — an “upgrade” to the indoor kit to suit the 5G environment in Germany and Europe was completed in January 2020. Details about original equipment manufacturer involvement were not disclosed.

TDE said it planned to launch the 5G indoor trial involving 200 ‘testers’ — comprising both enterprise and individual customers — in the quarter to 30 June 2020, and invited customer applications for trial participation at the end of February 2020. Both SKT and TDE will analyse customer feedback to inform commercial launch plans. No timeline for a full release was specified.

Although SKT’s 5G repeaters are geared up for high-band frequencies, which are better at penetrating buildings than low-band airwaves, the South Korean operator pointed out that they are also designed to support LTE signals.

In parallel to the 5G repeater announcement, the NatCo said it had 5G commercial services up and running in eight cities, including Berlin, Bonn, and Frankfurt. TDE launched 5G in July 2019 after a long-running and expensive auction of 5G-friendly frequencies (Deutsche Telekomwatch, #84 and #85).

Other 5G irons in the R&D fire

DT has ploughed other furrows to develop 5G technology and is far from reliant on picking the brains of SKT, even though it is a longstanding technology partner.

In mid‑2019, DT announced a new 5G test bed in Bonn, involving five locations, and Bonn joined Berlin and Darmstadt as a site where the Group is carrying out in‑depth testing of 5G technology and use‑cases. Teams at the facility are said to be working in close collaboration with TDE’s 5G Lab in Dresden to study interaction between network and devices.

Working with startups is another key Group focus for 5G innovation. “We intentionally opened up our 5G and edge infrastructure for startups and their ideas at a very early stage”, recently claimed Claudia Nemat, Head of Technology & Innovation at DT. TDE reported in July 2019 that 18 startups from nine countries were participating in its 5G Prototyping Programme, working on 15 different projects at the Berlin testbed. The programme was developed by hub:raum, DT’s tech incubator. Virtual reality (VR) and augmented reality (AR) are strong elements of 5G testing. hub:raum was said to be considering setting up a programme to help speed up commercialisation of 5G use‑cases built on VR and AR.