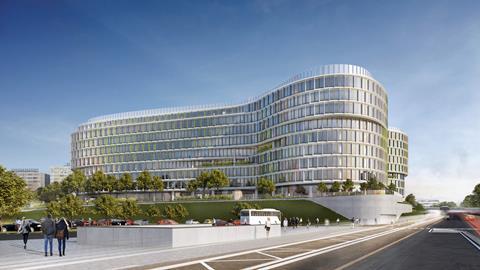 BT is to move most of its Hungarian workforce to a newly-constructed headquarters in a bid to better support the growing shared services and multinational corporate (MNC) support presence it has in the country.

A spokesperson for the operator said the approximate 2,000 staff it employs in Budapest will move to the new office, in the south west of the city centre, once it is completed in 2022.

The complex, at Budapest ONE Business Park, is a few minutes’ drive away from the operator’s current base in the city — but will feature better transport links via the nearby Kelenföld station, as well as a fitness centre and running track on its “panoramic roof”.

The move comes with BT in the midst of a wide-ranging real estate rationalisation and modernisation programme in the UK (BTwatch, #314 and passim), and the spokesperson said the Hungarian change “follows the same principles” as the Better Workplace scheme.

“The new office is in a better connected location and designed according to the latest standards. We believe that brilliant office environments will play a vital role in how we work in future, and it will help us attract talent.”

BT was advised on the move by property services group Colliers International.

The spokesperson said a Budapest-based team providing support for BT Conferencing customers had been “extremely busy over the last months as the demand for conferencing services has heavily increased due to COVID”. The Regional Service Centre was set up in 2007, initially in Budapest only. BT previously had a sales office in the country.