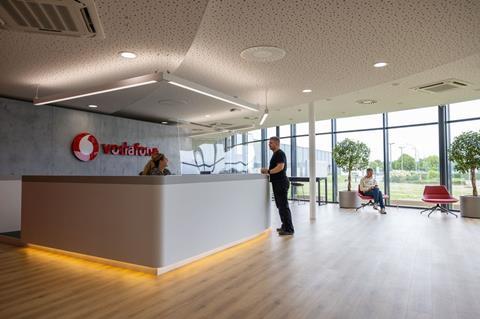 Vodafone Germany flagged the completion of its Kerpen office refurbishment.

The renovation brings the site in line with the operator’s headquarters in Düsseldorf, which focuses on establishing a “future‑ready” concept.

The remodelling of the 3,100sqm space, which hosts approximately 460 employees, took just over a year and will centralise Vodafone Germany’s technical and IT teams.

It aims to provide “sufficient space for creativity and innovation”, with an open-plan concept, modernised technology, and improvements to employee comfort.

Though financial details were not disclosed, Thierry Tournassat, Director of Property at Vodafone Germany, said in December 2020 that the operator would invest “several million euros” to convert the site into one of its five biggest centres for regional distribution of broadcasting radio and TV signals over its cable network. It appears the project suffered some delays, having initially been slated for completion by the end of 2021.

At the time, Tournassat said the “exchange in the team is just as important as the personal exchange over a cup of coffee. In addition to the flexible home office options, this plays a very important role in our hybrid working world” (Vodafonewatch, #193).

The announcement comes days after the unveiling of Vodafone’s second European R&D centre in Dresden.

In March, Vodafone UK confirmed a permanent shift to “blended working” practices, flagging a change in ownership at its Connection Newbury headquarters.