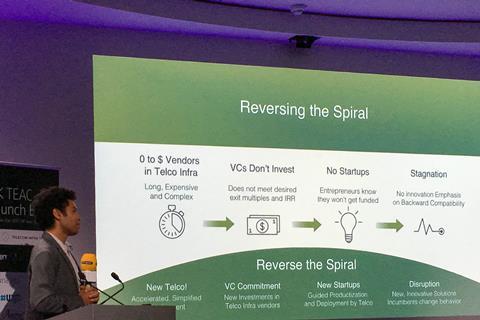 The TEAC launch event, at BT Tower, London, in late-September 2017, featured a judging panel to select two to four inaugural startups from six finalists drawn from a competition opened in spring 2017. While the judging could not be described as rigorous or akin to a Dragon’s Den‑style grilling, the pitches were interesting both in themselves and as a cohort. Each candidate had been put forward by a BT executive, and was subject to varying degrees of probing or encouragement from the BT-dominated panel charged with the selection decision. All candidates were given a strict ten minutes for their ‘pitch’ and a flexible five minutes for judges’ questions.

The startups were varied in scale and maturity, with some pitches fairly slick and assured, and others awkward, but presentational performance did not appear a decisive factor.

Interestingly, all three winners are domestic (and the others not), and thus potentially more manageable in terms of proximity as well as immediate scale and ambition (the others were more obviously angled for hyper-growth). This could be seen as best meeting specific BT and UK TEAC requirements, rather than TIP’s more grandiose global ambition.

Other recurring threads were earlier UK and European public funding, involvement of the University of Bristol, and drones.

Facebook’s Maguire presented Facebook’s vision for TIP as a force for good, to “connect the last billion”, including its contributions to the Open Cellular and Voyager reference designs, network planning innovation, and support for TEACs. He emphasised that “connectivity starts with fibre”, as well focusing on Facebook’s Terragraph Millimetre Wave (mmWave) mesh network project, which is set to use street furniture to provide blanket Wi‑Fi coverage in urban areas. Reinforced subsequently by Penneycard, Maguire positioned TEACS as ‘reversing the spiral’, whereby telco infrastructure innovation has stagnated because of an absence of startups that have been deterred by a funding drought caused by the sector’s long, expensive, and complex development cycles.

Somewhat extreme and self-serving, this picture ignores a reality where startups are not rare, telcos are already significant venture investors (and working to lessen the risk of carelessly squashing startups), and telco and IT are rapidly converging around programmable networks. More accurately, telco is just not sexy at the infrastructure level, and it remains to be seen whether TIP and TEACs will help change this.

… BT more pragmatic, but showing signs of change in a digital world

Watson’s presentation lacked the polish and visuals of Maguire, but was engaging in its own way, suggesting possible steps by BT towards adopting the savvier approach of US and other peers to exploit public utterances as agenda-defining whole-of-business pitches, rather than isolated (and too often contradictory) daytrips.

He highlighted the challenge of meeting video-led data demand growing at 50% annually, and related ‘scale programmes’, as well as the TSO angle that BT is the UK’s technology champion. Tying into TIP, he observed that large-scale telcos and vendors simply do not have all the answers. This view was later echoed by Hanif who said he always looked first to established suppliers, but could then find himself obliged to look elsewhere (for example, with rural access solutions, where startups are already being courted; BTwatch, #276, and #287). Similarly, DT’s Clauberg said the German telco was still driving innovation with existing suppliers, but that this had slowed, with the industry struggling to compete for new talent.

BT to big vendors: ‘you snooze, you lose’

When asked by BTwatch what message to give ‘monolith’ incumbent vendors regarding TIP, he answered obliquely, “if you’re asleep for too long, you risk missing out”.

Watson also referenced BT’s technology Scout network, which is seeking out new technologies and has presence heavily weighted towards Silicon Valley (but also covering the UK, Europe, Israel, and elsewhere).

The day ended in BT Tower’s revolving restaurant, with the winners announcement and a lacklustre speech by Theo Blackwell, the new Chief Digital Officer for the Mayor of London.

Around 50 attended the event, with the group encompassing TIP participants (including Orange; SK Telecom was a no-show due to travel disruption), academic partners (Cambridge, Strathclyde, and others), as well as industry analysts. Unsurprisingly, BT’s Martlesham Labs was well represented, including specialists and Scouts. The day was hosted by Darren Lewis, Principal Innovation Consultant at BT.