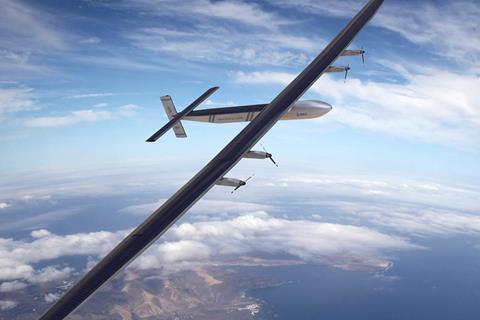 Telefónica formed a partnership with US-Spanish aerospace startup Skydweller Aero as it looks to accelerate the expansion of cellular coverage in underserved regions.

The telco is keen to explore how non-terrestrial solutions can “become an efficient complement” to established terrestrial networks in specific use‑cases, such as disaster relief and extended coverage in deep-rural areas. The agreement with Skydweller will see the companies work closely to “solve the coverage and connectivity gap”.

Oklahoma-based Skydweller launched as recently as 2019, but the origin of its technology dates back considerably further. The solar-powered aircraft project — initially known as Solar Impulse — was instigated by Swiss explorer Bertrand Piccard in 2003, operating for 14 years and receiving $190m (£142m, €169m) worth of investment before the intellectual property was sold to Skydweller.

The investment didn’t stop there. In September this year, the startup announced it had raised $40m (£30m, €36m) in an oversubscribed Series A funding round, led by Italian defence group Leonardo.

The Solar Impulse was designed as a piloted aircraft, but Skydweller’s focus has been to transform it into an unmanned, ultra-long endurance model, with sights set firmly on the concept of perpetual flight.

It began its flight test campaign last year, and hopes customers will be able to begin licensing the autonomous aircraft within 18 months.

Enrique Blanco, Global CTIO of Telefónica, said integration of terrestrial and non-terrestrial networks into a “single operational concept” is a “key aspect of current networks evolution towards beyond-5G” and that Telefónica wishes to “support the industry in this evolution”.

The agreement with Skydweller Aero is the latest in a string of non-terrestrial partnerships formed by Telefónica. In September, the operator formed an alliance with Swiss satIoT challenger Astrocast on the joint development of a new telematics product that leverages both terrestrial and “nanosatellite” networks. Telefónica is also engaged in a next-gen satcomms project in the UK, where it is using 5G and geosynchronous communications satellites from provider (and former Group investment) Hispasat to test connected and automated vehicles.

“ Skydweller believes that this technology has immense potential to improve society, promoting economic progress, development, and the advancement of renewable energies to fight climate change. ”