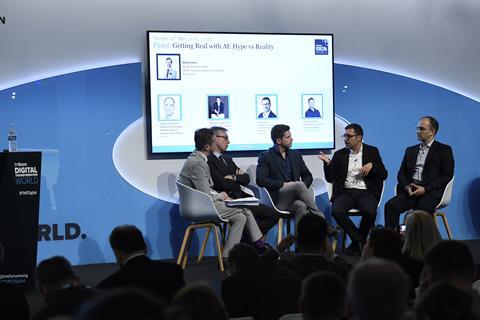 Daniel Vaughn, Telefónica México, on a panel discussing the realities of AI

Daniel Vaughan, Head of Data Science and Chief Data Officer, Telefónica México, talked about choosing the right data model at a presentation at Digital Transformation World 2019. During his talk, which was entitled What is the right data model for telcos to adopt?, he considered the choices that Telefónica Group has made on developing a centrally-driven data strategy that can accommodate local market requirements, while ensuring new data services are also replicable across its footprint.

From here, the operator was able to begin the development, and subsequent implementation of its Unified Data Reference Model (URM – Telefónicawatch, #121, passim), a process described as “very hard, very complicated”, but which Vaughan considers is now providing valuable benefits.

Vaughan said that the two key questions revealed a set of core values and objectives for Telefónica as a customer-centric telco, which the URM had to complement.

The three core values identified are:

Telefónica Group was recently listed as the highest performing telco in the 2019 Corporate Accountability Index compiled by non-profit citizens’ rights entity Ranking Digital Rights (RDR). However, RDR found that Telefónica and the other leading companies in the Index fell short in key areas affecting freedom of expression and privacy, with the Spanish telco achieving 47% and 49% in the two categories, respectively. Although Telefónica was found to have made a number of improvements to its privacy policies, it still fell short on disclosure in a number of areas, particularly around keeping users informed of the way data is shared with third parties (Telefónicawatch, #135).

Building on these core values, Vaughan moved on to the company’s four major objectives concerning using data as an asset:

“Data models are like straitjackets; they restrict what you can do in future. So we have to think about it in two ways in the design phase. It has to be ‘forward-compatible’, that is able to adapt to changing market circumstances, and to be backward compatible. ”

Vaughan talked through three enablers which he said were instrumental in the creation of the URM, based on the data principles identified by the Group.

“That’s how we create value in the data economy, doing these three things and sharing code. ”

While Telefónica built the URM internally, Vaughan acknowledged that in doing so it had used some best practices from TMF’s long-established data reference model, the Information Framework, usually referred to as the SID (for shared information/data model).

With the theory in place, Vaughan said putting the URM into practice proved very painful – more so for the local teams than the global ones. The early deployments did, though, provide five main lessons that have been applied to the future development of the URM.

Despite the challenges, Vaughan was predictably upbeat on the benefits of the process, and stressed the success of the components built on top of the URM in his home market of Mexico. He also noted that the work in the OB is expected to provide smoother sailing for future solutions across the Group as a whole, as well as within the OB.

“In Mexico we found the URM worked well, but it still needed extra data to deploy machine learning solutions, which is what data scientists call predictive variables or predictive models. So we decided to create a feature meta-store, because data scientists [across the Group] are creating the same features or variables over and over again. The feature store has been very helpful, enabling the team in Mexico to build machine learning-based and AI solutions very quickly as a common strategy. ”

Vaughan said that now use cases are beginning to be effectively reused across OBs, with local resources creating universal solutions, and a virtuous circle emerging between local development teams and the centralised global office.

This is also said to be ensuring Telefónica’s core values are adhered to in all markets, and regulatory standards can be met, while supporting the principal objective of strengthening and deepening customer relationships