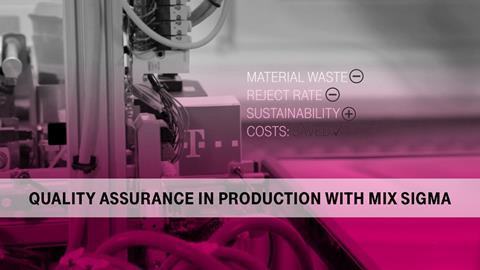 Developed in collaboration with Telekom Innovation Laboratories (T‑Labs) and lighting technology specialist Osram, Mix Sigma is said to be an advancement on the Six Sigma system that was originally developed by Motorola Solutions in 1986. Six Sigma is said to have provided a common worldwide language for measuring quality and became a global standard.

In a short YouTube video, T‑Sys MMS questions whether the Six Sigma management system is really the best choice for quality assurance in production processes. The Deutsche Telekom unit claims that Mix Sigma supports faster and more cost‑effective production processes by “compensating for any production errors in the post‑production phase”.

Mix Sigma algorithms are said to be able to pair two parts of inferior quality in order to create an acceptable component. Here, T‑Systems gives the example of a bearing roll that has been drilled too deep being combined with a bearing hub that is too long.

Few other details of the Mix Sigma system were provided, and it’s not clear whether or not the solution is available to customers or a work in progress. According to T‑Systems, Mix Sigma “links existing concepts with new quality management technologies that could replace the existing Six Sigma approach”.

It’s also not clear what role Osram is playing here. It’s worth noting that DT already has a close working relationship with the lighting specialist in the field of smart factories. The Group is collaborating with both Osram and Ericsson on the deployment of an LTE/5G campus network in Schwabmünchen (Deutsche Telekomwatch, #77, #79, #85, and #91).

T‑Sys MMS was due to be merged into T‑Sys’ recently launched Digital Solutions unit, according to an announcement in April 2018. However, it has since emerged that T‑Sys MMS will remain an independent entity within the T‑Sys portfolio (Deutsche Telekomwatch, #97). Ralf Pechmann is listed as CEO of T‑Sys MMS on LinkedIn. On the T‑Sys MMS website, Pechmann and Marcus Gaube are referenced as joint Managing Directors of the unit.

According to Purdue University, multiple branches, disciplines, and schools of thought have grown from the original Six Sigma concept over the years, to fit new needs. One such evolution is Lean Six Sigma, described as a combination of management methods that builds on the principles of Six Sigma. Six Sigma is said to be about monitoring the supply chain for defects, identifying issues, and solving them as effectively as possible. The Lean method is entirely focused on eliminating waste. Purdue noted that “as the line between Lean and Six Sigma continues to blur, entirely new methods and unique philosophies are bound to emerge”.