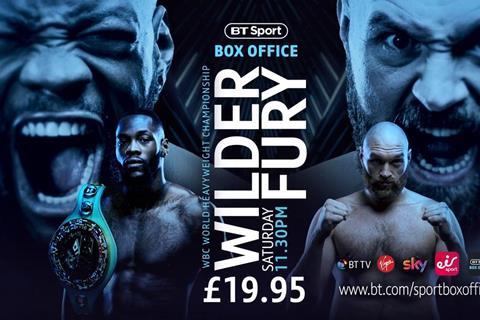 The Deontay Wilder–Tyson Fury heavyweight boxing rematch broadcast on BT Sport’s pay‑per‑view (PPV) channel was tagged as one of the most lucrative PPV TV events ever held. The global record is apparently just shy of two million for a heavyweight boxing event, and while the first fight between the pair, which ended in a controversial draw in 2018, earned a comparatively modest 420,000 buys in the UK and 325,000 in the US, considerably greater interest surrounded the rematch. BT Sport charged £24.99 for the rematch, up from the first bout’s £19.99 fee (BTwatch, #281). BT Sport has a longstanding relationship with major boxing promoter Queensberry Promotions and boxing broadcaster BoxNation, both of which are controlled by Frank Warren, a leading business figure in the sport. BT and Warren also signed a deal with national free‑to‑air broadcaster ITV ahead of the Fury‑Wilder event, which saw BT Sport and ITV share a live broadcast of several other Warren‑promoted fights on the evening of the heavyweight title bout, providing a considerable promotional platform for the PPV event. Broadcast solution provider Gravity Media supported BT Sport on production for the fight.