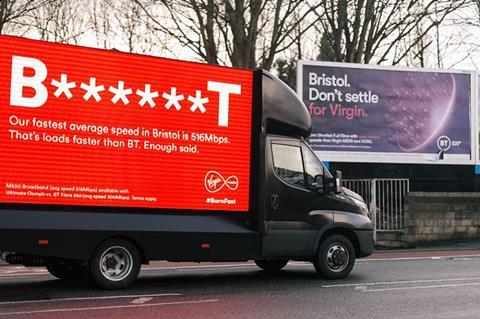 Virgin Media UK took a pop at BT’s fibre‑to-the‑premises (FTTP) advertising in the city of Bristol by branding it as “dubious” and “unsubstantiated”. The comments came after several billboard promotions warned local residents not to “settle for Virgin” and to instead get “more reliable speeds” from BT’s full‑fibre broadband services. In response to BT’s claims, Virgin Media deployed a number of mobile billboards in front of the BT posters in locations across the city, displaying the headline “B*** ***T”, under which it read: “our fastest average speed in Bristol is 516Mbps. That’s loads faster than BT. Enough said”. Virgin added that it had “formally challenged” the BT adverts, presumably with the Advertising Standards Authority, and contacted BT directly on the subject. It also noted that its response to BT’s outdoor advertising campaign was to ensure that “residents get the message in a fun and humorous way — all in the spirit of clarity and competition”.