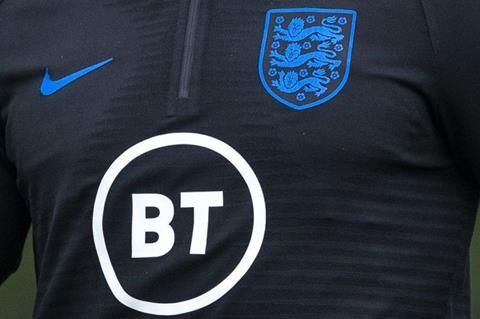 BT Group signed a five-year partnership agreement with the Football Association (FA) to become the exclusive lead sponsor of all 28 England football teams.

The deal, reportedly worth £50m-plus over its duration, will see EE renew its sponsorship of Wembley Stadium and its role as lead connectivity partner at the facility.

BT’s new logo (see separate report) will now appear on all training kit worn by the England teams, including in the run-up to the men’s UEFA Nations League finals and the FIFA Women’s World Cup from June 2019.

BT emphasised the partnership’s focus on grassroots-level support, and said the sponsorship deal will enable it to work with football clubs in communities across the country through initiatives spearheaded from Wembley Stadium in London and St. George’s Park (the national football centre) in Staffordshire.

BT and EE customers will benefit from exclusive England team match offers and tickets to FA events. The telco added that more details about the “broader ambitions of the partnership will be revealed in the coming months, and is part of a wider new BT brand and sponsorship strategy to champion the UK”.

EE has been the lead sponsor and connectivity partner at Wembley Stadium since 2014 (a year before it was acquired by BT), in a deal with the FA that was thought to be worth £25m over its six-year term. BT has been providing communications and IT technology at St. George’s Park since October 2012 (BTwatch, #238).