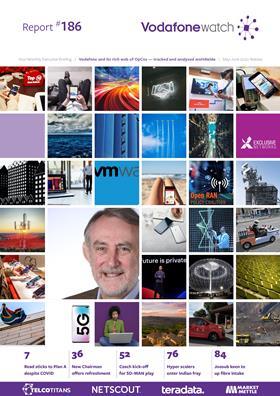 GROUP: Vodafone’s management assured that they were not being buffeted off course by COVID‑19, and maintaining the strategic focus they have set out around improving commercial performance, digital transformation, and squeezing more value out of Group assets (or selling them). A virtual results presentation for the quarter and year to 31 March 2020 saw the top duo of Chief Executive Nick Read and Chief Financial Officer Margherita Della Valle postpone guidance until later in 2020, when they expect the pandemic’s impact to become clearer. However, their report was received positively, thanks to an unchanged dividend policy, ongoing (but slow and patchy) progress in key markets, and confirmation of a new cost-cutting programme. [pp.7–15.]

As a side-effect of Read and Della Valle’s asset utilisation improvement plan,the Group looked set to add to its growing joint venture and associate co‑owner family, and the web of investor politics these relationships bring with them, as partner Telecom Italia confirmed it had entered talks over a sale of part of its shareholding in tower JV Infrastrutture Wireless Italiane. The telco is in exclusive negotiations with a consortium of investors led by French private equity player Ardian Infrastructure. At the same time, one co‑parented venture was removed from the Group’s roster as Vodafone Portugal sold its 45% stake in systems integration player Celfocus to long-time partner Novabase Group. [pp.16–19.]

Relations with powerful coopetitors Alphabet, Facebook, and others are evidently become more complex and significant, and a major strategic question mark for Group leadership. Facebook underlined the bipolar nature of its relationship with Vodafone by tying with the Group on an African submarine network venture, while at the same time agreeing a deal to invest in Indian nemesis Reliance Jio. Facebook and Vodafone were also involved in the launch of a new organisation called the Open RAN Policy Coalition, focused on lobbying for disaggregation of networks, and expanding their collaboration beyond the Telecom Infra Project. Following the Jio news item, Vodafone Idea denied reports that it was considering a plan by Google to take a stake in its business. Vodacom Mozambique tied with Google parent Alphabet’s Loon connectivity business. [pp.20,21,46–48,76–79.]

Executives from Vodafone and Telefónica indicated that operators were continuing to wrestle with challenges around implementation of ‘cloud native’ technologies such as containers and microservices. Interworking was highlighted as one difficulty. [pp.28–30.]

Small‑cells remained another area where operators are evidently yet to crack the return-on-investment code, and the Group was among European telcos flagged to be considering new business model options when it comes to sharing rollout expense. A study, published by the Next Generation Mobile Networks Alliance and led by Vodafone, gave considerable weight to Hong Kong telcos’ inter-operator auction model for small-cell deployment in considering options for cost‑sharing and enabling delivery of 5G services over mmWave spectrum. [pp.31–33.]

Luxembourg-based joint venture Tomorrow Street emphasised that it continues to be an active vehiclefor innovation within Vodafone’s ecosystem, despite an apparent quiet few months. It partnered with French cloud and security provider Exclusive Networks on startup discovery. Digital Barriers, a Tomorrow Street alumni, tied with Vodafone to launch a Heat Detection Camera for enterprises seeking to ward off coronavirus outbreaks in offices and other venues. [pp.34,35,42,43.]

Vodafone confirmed, after a long search, that it had found a replacement for Chairman Gerard Kleisterlee, who is to step down in November 2020 after coming to the end of his nine-year mandate. Jean François van Boxmeer, CEO of Heineken until very recently, is to step into Kleisterlee’s shoes — and potentially looks a different prospect to the somewhat quiet Dutchman. Notable is a strong track record on growth and shareholder return over his 15‑year stretch at the helm of Heineken, a focus on expansion-led M&A (rather than rationalisation, cost synergies, and dismantling), and a complete freedom from telecoms legacy. [pp.36–39.]

Vodafone remained set on building a significant presence in the consumer IoT market, despite having yet to flag any numbers on its performance in the space. The Group sought to broaden the V by Vodafone suite instigated by former CEO Vittorio Colao by tagging on a partner certification programme. [p.44.]

EUROPE: As Group leadership continued to talk up the SD‑WAN space as an arena in which it could inflict a hit on incumbent rivals, Vodafone Czech Republic became the first OpCo to launch services based on technology from VMware’s VeloCloud business. The move appears based on a new, multi-country arrangement with the vendor. [pp.52,53.]

Vodafone UK’s lack of a network-based convergence play was thrust back into the spotlight as Telefónica Group and Liberty Global confirmed they were bringing their UK assets together, to create a strong second convergence player behind incumbent BT. The prospect of an alliance of convenience between BT and Vodafone came back on the agenda, with Read again talking up VfUK as cash-strapped BT’s potential running-buddy on fibre. Figures from both telcos also used May 2020’s DSP Leaders World Forum 2020 to highlight the importance of partnerships in the post-COVID‑19 era. Elsewhere, a report positioned Liberty’s Virgin Media as a growing threat to BT and Vodafone in the public sector market. [pp.22–26,67–69.]

Empowered by inclusion within the boundaries of Read’s core focus area, of Europe and Africa, Vodacom Group continued to lay out plans for expansion in its home market and across the continent. A reorganisation saw it re‑create a dedicated home-market OpCo, to give more definition to its different lines of business. CEO Shameel Joosub confirmed the operator remains keen on a fibre infrastructure buyout in South Africa and reaffirmed Vodacom’s interest in B2B and B2C partnerships, as part of its ‘platform strategy’. This took the operator into the realms of consultancy services and next-generation private networking. [pp.80–86.]