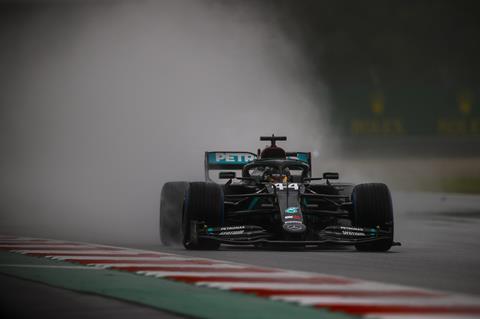 Italy’s INWIT wants to be Mercedes of tower race

Speaking during the provider’s results call for the quarter to 30 June 2020 (Q2 FY20), held on Friday, Ferigo said he wanted “to create, to define INWIT as the best set up TowerCo in Europe” — and in the process presumably become the Toto Wolff of the regional passive infrastructure world.

Front of the grid

INWIT, he said, is focused on becoming a “new, very interesting machine”.

“And so let me say, the setup will be, continues to be — okay, I’m Italian, so it’s very difficult for me to say it — to build the Mercedes of Formula One in the tower environment.”

Ferigo said the JV, currently, was “very concentrated” on an integration effort following the March 2020 merger of TIM and Vodafone’s tower assets (Vodafonewatch, #185), and focused purely on organic growth.

At the same time, he indicated the business was already “studying” the opportunity to expand into markets beyond Italy.

Once INWIT has developed best practices internally, these could be more easily exported with what Ferigo described as a “plug-and-play scheme”. “We are studying and after one year, 18 months, we will start to analyse deeply some concrete opportunity”, he added.

An efficiencies-centred integration programme, due for completion in March 2021, has been focusing on a refresh of INWIT’s supply chain ecosystem, aimed at “strengthening” its vendor line-up post-merger, as well as “systems cloud-ification”, “process digitalisation”, and creation of “one, single, integrated team”.

Ferigo also outlined an increased focus on innovation within the merged business, involving “exploring and assessing” new opportunities around edge computing infrastructure, smart-city solutions, use of drones, and “green solutions”. A more detailed, new business plan is to be laid out by INWIT in November 2020, when it reports its Q3 figures.

Vodafone’s cash grab could push back

Ferigo’s comments regarding international expansion are another illustration of the competing interests and tensions Vodafone has let loose with its move to extract national tower assets from Europe Region OpCos, and in some cases meld them with rival setups.

Internally, the idea behind Vodafone’s TowerCo creation programme clearly came out of its powerful Group Finance department and its focus on debt reduction and ‘asset utilisation’ improvement, to strengthen the challenged operator’s financial footing.

However, as the likes of INWIT seek to deliver on that mandate, and flourish as standalone businesses, it remains to be seen how their operational efficiency and commercial ambitions can be balanced with OpCo network teams’ focus on services differentiation versus operator rivals.

If INWIT has ambitions to expand internationally, as part of its go-to-market plan, there is also the question of how Vodafone can ensure it does not come into conflict with other national TowerCos and the over-arching, Germany-based Vantage Towers business, without limiting INWIT’s potential.

In the midst of it all, too, are the crowd of Group shareholders and TowerCo co-owners that will all have their own ideas about how each business should approach a rapidly-evolving part of the telecoms market, which geographies and product segments to expand to, and how to go about creating efficiencies.

With TowerCo multiples soaring, Vodafone has said a lot about the cash-raising potential of its tower extraction programme — less so about how it is going to manage all of these interests.

In INWIT’s case, the JV is morphing, through a pending ownership rejig due to be firmed up later in 2020, towards a convoluted shareholder structure seeing:

As with other European TowerCos, Vodafone’s interest in INWIT will be controlled by Vantage Towers, which is itself set to open up to new shareholders through a 2021 flotation.

The comments came as INWIT reported an apparently solid set of results for Q2 — the first quarter featuring performance as a merged business (although comparison with past performance remains somewhat blurred).

Ferigo said the JV had seen “no significant impact from COVID-19” and said it was ready for a “step-up in the level of activity” from later in 2020, outlining a number of business drivers it plans to leverage following the deal’s completion. These include: