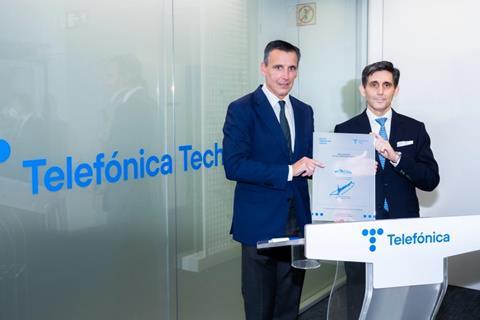 The DOC is situated at the Distrito Telefónica HQ in Madrid and forms part of the operator’s effort to transform its central offices into an “Innovation and Talent Hub” by 2024.

It will bring together teams and operations experts working in the Telefónica Cybersecurity & Cloud Tech division, including those already based at the Group HQ and two teams currently working from other Madrid offices in Gran Vía and Julián Camarillo. Together, these teams will sit within a network of eleven operations centres around the world.

Some 200 staff will work from the DOC, coordinating with Telefónica Tech’s 2,300 colleagues in international operations teams.

Telefónica Tech was established in 2019 and started operations the year after. It currently employs more than 5,400 staff.

Cybersecurity & Cloud gets a new home

Álvarez-Pallete was joined by Telefónica Tech Chief Executive José Cerdán for the inauguration. Cerdán said the DOC will be used to deliver an “innovative and comprehensive cybersecurity and cloud offering”. It will also enable the provision of personalised digital tools and services, he added.

Álvarez-Pallete pointed to the DOC’s place in the wider Group transformation initiative. “We continue to enrich our global Innovation and Talent Hub with the services and resources that society demands”, he said.

The Group plans to invest €100m into the Hub within the next two years, with completion anticipated in 2024 to coincide with the operator’s first centenary. As well as hosting Telefónica staff, the 140,000 square metres of office space will be used to train 100,000 people annually in digital skills, serving as a tool to “attract and retain talent” according to Álvarez-Pallete (Telefónicawatch, #159).

Distrito Telefónica also hosts the Group’s Universitas, a “corporate university” launched in April 2022 to provide working spaces for both face-to-face and remote training. The Universitas campus includes a virtual learning environment equipped with video collaboration tools, and was described as a core part of the Innovation and Talent Hub strategy (Telefónicawatch, #162). Telefónica partnered UK-based cloud communications software provider LoopUp Group, which will deploy its Hybridium events solution at the HQ. Hybridium will be used to support Universitas hybrid classes.

Also on the HQ campus is an Innovation Center, which hosts R&D projects (such as that with Grupo Álava on predictive maintenance for industrial machinery) and talent training (Telefónicawatch, #161).

Further, the transformation led to a reorganisation of Fundación Telefónica. The Group’s charitable arm was brought within the Innovation and Talent Hub strategy under new President Álvarez-Pallete in February 2022, with a renewed focus on employability training for “those that need it most”.