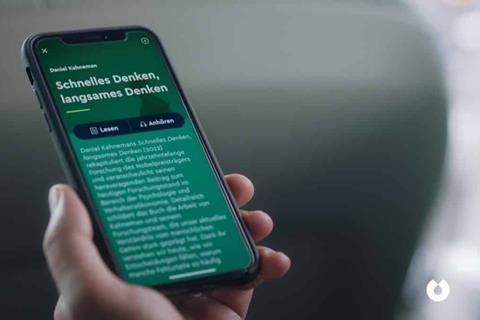 Former Deutsche Telekom interest and book-summarising startup Blinkist posted a positive income statement for the first time in its ten-year period of operations.

In its financial statement for the year ended 31 December 2020 (FY20), Blinkist reported €728,000 in income, reversing a €10.1m loss in FY19. Achieving profitability was put down to a move to prioritise “profitability instead of growth”, although FY20 saw the business grow its active user base by 8%, to 20 million, and sales by 26.4%, to €42m, thanks to improvements in its subscription model and expansion to international markets.

Blinkist hosts a library of more than 4,000 non-fiction titles, the key points of which are summarised in 15-minute snippets to be read or listened to via an app. The business has raised $35m (€26m/€31m) in the past six years, with US investor Insight Partners leading the most recent Series-C round, held in 2018. In its latest Annual Report, Blinkist confirmed it did not plan to hold a round of financing in 2022.

Deutsche Telekom’s tech incubator hubraum made Blinkist its first investment after being founded in 2012, when it took part in a €147,000 seed funding round. Holger Seim, Co-Founder and Chief Executive of the Berlin startup, said hubraum connected Blinkist to mentors in the Berlin startup ecosystem, and “were really helpful in getting the word out initially by leveraging some of Deutsche Telekom’s efforts”. It appears that hubraum exited Blinkist in 2021.

hubraum’s initial buy-in was said to have been made after “nothing more than a single PowerPoint presentation”. The unit has since shifted focus onto more mature startups that have a product and customers.