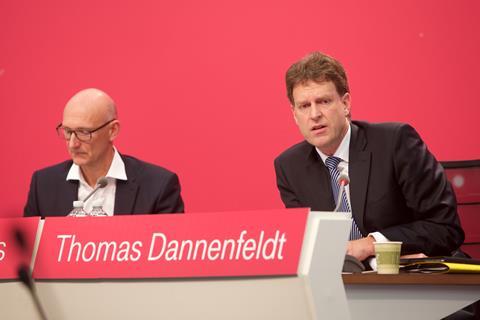 The former CFO — who served at Deutsche Telekom for 26 years before stepping down in mid‑2018, citing personal reasons (Deutsche Telekomwatch, #71) — will join Ceconomy’s Supervisory Board in mid‑February 2021, and is expected subsequently to take the Chairman’s spot from the outgoing Jürgen Fitschen.

Dannenfeldt is also currently a Non-Executive Director at Nokia and sits on the Advisory Board at IT management consultancy axxessio.

Headquartered in Düsseldorf, Ceconomy — which has an expansive European footing — was born out of a demerger from Metro Group in 2017. It also operates Metro Group spin-off MediaMarktSaturn, which comprises German consumer electronics chains Media Markt and Saturn. Ceconomy is currently in the process of reorganising its business and operating model, pitched as a means of centralising and “harmonising” the Group’s component parts to make operations more cost‑effective and customer‑centric.

Gone, but not forgotten

Dannenfeldt spent his last five years at Deutsche Telekom as Group CFO, after replacing Timotheus Höttges when he stepped up to the Chief Executive (CEO) role.