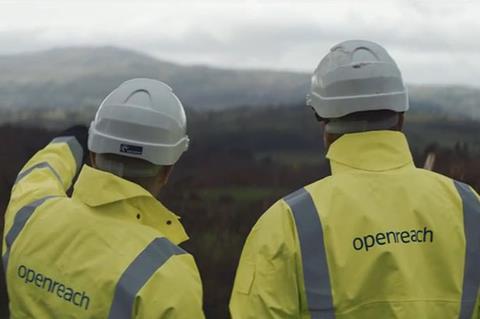 Openreach flagged it has doubled its targets for “rural” full-fibre connectivity and now aims to pass “at least” six million premises in hard-to-reach areas by 2025.

The new target will be underpinned by investment “second only to HS2”, said Clive Selley, Openreach Chief Executive, referencing the £65bn+ (€75.7bn) rail infrastructure project. The financial outlay will largely be shouldered by Openreach itself. “Some parts of the country will inevitably require public funding. But our expanded build plan means taxpayer subsidies can be limited to only the hardest to connect homes and businesses”, Selley said.

The “hard-to-reach” label refers to Geographic Area 3, as defined by UK regulator Ofcom. It is made up of regions that are considered to be less commercially appealing for fibre roll-out. The “vast majority” of Openreach’s six million premises are in this Area 3.

Openreach’s total full-fibre footprint reached 4.6 million premises in May 2021, having grown at an average of 40,000 per week in 2020. In the last week of March this year, Openreach claimed to have passed 100,000 premises, with targets set to average “up to 75,000” a week, though no time-scale was offered for this ramp-up.

To hit the raised target of 25 million homes passed by the end of 2026, Openreach will need to average 69,000 per week. On current figures, this appears eminently achievable, but it is hard to judge how much targeting of the six million “hard to reach” premises will impact the overall roll-out. It also comes with the caveat that the ambition will only be reached “if the right investment conditions are in place”.

The heightened ambition will require a substantial recruitment drive, described by Openreach as its “biggest ever”, with 1,000 further roles created in addition to the 2,500 announced in late-2020 (BTwatch, #319).

The roll-out plan will support the government’s target of reaching 85% of the UK (approximately 25 million premises) with Gigabit-capable broadband by 2025.

As with any government-affiliated scheme, the Openreach announcement did not shy away from sloganeering. Selley claimed the rural focus will help “level-up” the UK economy, a sentiment echoed by Digital, Culture, Media and Sport Secretary Oliver Dowden, who added a “build back better” and “next-generation” connectivity mention for those playing buzzword bingo.

Openreach has also been vocal about the government’s role in enabling rural connectivity expansion. In a statement yesterday, it called on UK leaders to collaborate with the industry to “tackle collectively” the digital divide.

Selley added that he hopes to see other companies “step forward” to build in rural regions too. Kim Mears, Managing Director of Strategic Infrastructure Delivery at Openreach, described partnerships with other builders as one of five ways it aims to “rise to the challenge” of rural connectivity. More than 120 companies have earmarked 26,000km of underground network and 200,000 poles to deploy fibre networks, which is an indicator that “we’re open for business”, Mears said.

Partnerships with the UK and devolved governments are another enabler. The Building Digital UK superfast broadband scheme has reached five million premises since 2013; the Scottish Reaching 100% programme is currently laying subsea cables for 15 island communities; and a deal with the Welsh government is targeting the ultrafast full fibre deployment for the 5% of premises that currently do not receive superfast connectivity.