BT ‘committed’ to NI after Chamber of Commerce deal 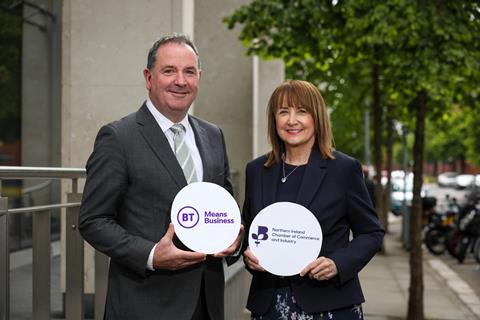 BT ‘committed’ to NI after Chamber of Commerce deal

BT renewed its deal with the Northern Ireland Chamber of Commerce and Industry, signing as its Communications Partner for a further three years.

The refreshed agreement builds on a relationship between BT Enterprise and the NI Chamber that spans more than a decade (BTwatch, #294 and passim).

The NI Chamber represents the interests of local commerce with a membership of more than 1,000 businesses, totalling more than 100,000 employees.

Paul Murnaghan, Enterprise’s Sales Director for Major & Public Sector in Northern Ireland, said he hopes the partnership will “promote economic recovery and growth for businesses” in the country.

He said it reflects BT’s “commitment” to Northern Ireland and pointed to the Group’s Riverside Tower offices in Belfast as further evidence of the claim. The offices will accommodate 2,000 employees once a “multimillion-pound” revamp is completed. Fit-out contracts were handed out in early-2022 to begin the redevelopment, actioned under BT’s Better Workplace programme (BTwatch, #324 and #334).

In welcoming the partnership renewal, NI Chamber Chief Executive Ann McGregor described BT as “one of the region’s most significant investors”.

Alongside his Enterprise role, Murnaghan was appointed President of the NI Chamber in mid-2021 (BTwatch, #326).