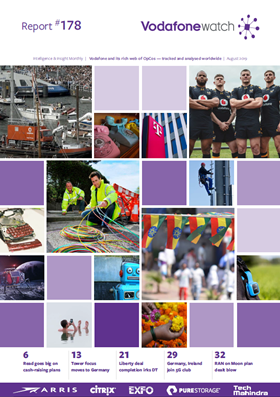 Vodafone’s management continued to portray optimism regarding a “gradual recovery” for the business as various country units slowly work through their competitive and macro challenges, or ‘lap’ past quarters before the damage took place. The Group remained in reverse gear on revenue during the three months to 30 June 2019, amid patchy performances across the footprint and particular problem spots in India, Italy, Spain, and South Africa. Still, the message from leadership was that top‑line trends have bottomed out, at least in the latest trough, and that momentum is being regained. [pp.6–10.]

Strategically, the key theme of the Q1 results presentation was expansion of efforts to extract cash from non-core assets, to ease balance sheet pressures. As the four-country Liberty Global cableco buyout was firmed up, adding further to Group debt, Chief Executive Nick Read provided a rundown of the various parts of the business he is looking to jettison, to raise cash. He said Vodafone remained committed to finding an M&A solution in Australia after wrapping up the sale of Vodafone New Zealand. He also highlighted the “double monetisation” opportunities being opened up through central and in-country tower management reorganisations, including now-tied-down alliances in Italy and the UK, and partnership discussions with rivals in Germany. A further possibly related initiative could see Vodafone tie with competitors on consolidation of 2G/3G network infrastructure, alongside spectrum re‑farming. [pp.13–19.]

Vodafone’s 5G footprint extended to six Europe Region markets with the technology’s introduction in Germany and Ireland. The Group’s commercial focus evidently remains on urban users and a switch in pricing strategy to tiering by throughput rather than data allowances, as seen with 4G. In Vodafone Germany’s case, a mix of “unlimited” and capped plans were put on offer and the onus was on careful differentiation from incumbent Telekom Deutschland, which has also debuted 5G. Vodafone has indicated it is planning to bring 5G live in a further seven countries “over the next few months”, inferring extension beyond its twelve‑market Europe Region. [pp.29–31.]

Vodafone’s plan for a technical and publicity boost through installation of a 4G base station on the Moon, trumpeted loudly at 2018’s Mobile World Congress, hit a snag after project lead PTScientists filed for insolvency. PTScientists insisted it intends to continue its work to “make the first European lunar mission a reality”, but with a revised timeframe. Vodafone said it hopes the company will “find a way out of this difficult situation”. [pp.32,33.]

Wholesale fibre joint venture SIRO raised finance from a syndicate of international banks in a bid to “accelerate” its broadband infrastructure rollout programme, having fallen behind schedule. Following the deal, SIRO remains committed to its plan of connecting 450,000 premises to Gigabit connections, and aims to deepen operations in Cork and Galway, while challenging incumbent eir in Dublin’s suburbs. [pp.34,35.]

Vodafone continued to deny allegations of collusion with UK competitors in connection with the collapse of mobile retailer Phones 4u. [pp.37–39.]

REST OF THE WORLD:

While now segregated from Vodafone’s main P&L, Vodafone Idea’s competitive and financial struggles remained in the spotlight, and activity continued to revolve around the new joint venture’s need to preserve cash flow and push through post-merger setup tasks as speedily as possible. VfI and rival Bharti Airtel were reported to be considering sitting out India’s upcoming 5G auction unless so-called “exorbitant” reserve prices for concessions are lowered. Amdocs became the latest vendor to flag an engagement with VfI, to aid integration of systems. The US player is to shift Idea Cellular contract users onto the Service Monetization Software Suite it implemented at Vodafone India before the 2018 tie-up. [pp.43–45.]

While territorial expansion remains very much off Vodafone’s Group-level agenda, Vodacom continues to seek new markets in Africa. Ethiopia, a territory that Vodacom has been eyeing for nearly a decade, remains in the operator’s sights, with opportunities around part-privatisation of state operator Ethio Telecom and new licence liberalisation expected to open up in the coming months. Vodacom was among a reported range of interested parties. Vodafone’s leadership emphasised Africa as part of its core territory, despite asset sell-offs taking place elsewhere. [pp.47,48.]

Vodacom South Africa continued Internet of Things expansion with the release of the Group’s V by Vodafone family of consumer-oriented solutions. [p.49.]